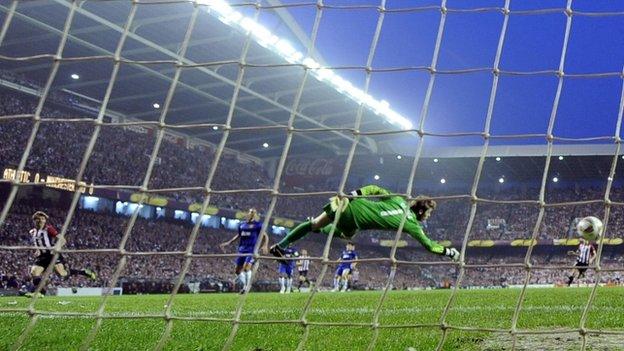 Manchester United crashed out of the Europa League in devastating fashion as they were outclassed by Athletic in their last-16 tie in Bilbao.

Ryan Giggs then headed wide but Oscar de Marcos put further daylight between the sides when he crashed in.

Wayne Rooney scored from 25 yards late on but it was merely a consolation.

It was a fine strike from the United forward to score his 28th goal of the season, but it was only a footnote as a young Athletic team once again posed all sorts of questions for their opponents.

Just as in the Old Trafford game a week ago Marcelo Bielsa's side pressed all over the pitch and attacked en masse, and in the end Sir Alex Ferguson's team could not stem the flow.

That it came from a side seventh in La Liga, 33 points behind leaders Real Madrid, perhaps added weight to the argument surrounding the strength of the Premier League challenge in Europe this season.

And only the most churlish of observers would begrudge the Basque team a place in the next round as United ended a disappointing European campaign which failed on two fronts, following their Champions League exit.

With a five-man midfield closing the many gaps that appeared in the first leg, last season's Champions League finalists had a more solid base from which to attack.

But after Ashley Young, operating on the left, had a close-range shot blocked by the Athletic defence, the hosts began to tease openings from their left flank.

Muniain struck a post on 14 minutes when he was cleverly found by Llorente's lay-off and De Marcos should have buried the follow up, but skied over from eight yards out.

Llorente then dismissed any worries about that faux pas when he peeled away from Rio Ferdinand and volleyed in Amorebieta's long diagonal pass.

It was a glorious strike as the 50-yard assist came over his shoulder, and it was only a shame the striker had to be replaced because of injury before the break.

The goal clicked United into a higher gear but some robust Athletic defending limited them to a close-range Giggs header which was deflected over.

As much as Premier League leaders United wanted to make an impression as the game progressed, they were not allowed to.

The pressing, link-up play and tempo that the hosts produced did not give Ferguson's team any chance of feeding an isolated Rooney up front.

Indeed, Athletic's status in the game was highlighted when right-back Andoni Iraola danced round Ferdinand and Jonny Evans but shot inches wide.

But the skipper played a part in the second goal when he crossed from the right, and once the ball dropped to De Marcos he smashed past David de Gea.

Markel Susaeta and substitute Gaizka Toquero could have added to the total before Rooney gave United something to cheer as he curled in.

United will now return home to maintain their Premier League challenge, but there is no doubt they received a footballing lesson that will be hard to forget.