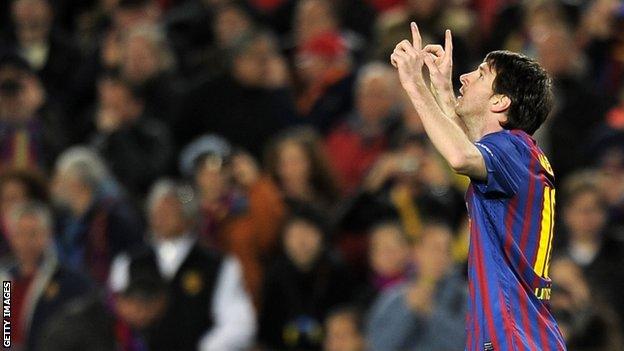 His class is just extraordinary, there's no discussion. Without Messi, Barca are the best team and with him, they are in another galaxy

The Argentine has now scored 53 goals in 49 games for club and country this season, moving him to within seven goals of becoming the club's record scorer.

Cesar Rodriguez struck 235 times during a 13-year stint at the Nou Camp but Messi looks set to eclipse that before his 25th birthday.

At times he appeared to be playing on an entirely different level as he brought his phenomenal tally up to 228 goals in 311 appearances - which includes 186 in his last 201 games - and condemned the Germans to a 10-2 aggregate defeat.

And his five at this stage of the competition helped Barca send out the clearest signal yet that they intend to reach their third final in four years and become the first club in Champions League history to defend the title.

The 24-year-old scored twice in a relatively ordinary first-half showing from the home side before adding three more after the break as Barcelona went through the gears to ruthlessly dispatch a Leverkusen team who beat Bayern Munich at the weekend.

There was even time for manager Pep Guardiola to hand young midfielder Tello a European debut as a replacement for Andres Iniesta, and then see the 20-year-old score twice in seven minutes.

Leverkusen substitute Karim Bellarabi fired in the smallest of consolations when he curled into the corner in stoppage time, but the German side were well and truly trounced.

Guardiola but on this evidence would be mad to walk away from the best side in Europe, particularly when armed with a one-off of a number 10.

Leverkusen, trailing 3-1 from the first leg and without an away win in this competition since October 2002, committed men forward early on, but when Gerard Pique cut out a cross Barca sliced their way through in a matter of seconds as Xavi clipped a pass over the top to find Messi running in on goal.

"Messi is the best ever. I played in a great LFC team of the late 70s and early 80s which ruled Europe but I must say I think this Barcelona team would batter us." Former Liverpool midfielder Terry McDermott

"Messi is a joke. For me the best ever."Manchester United striker Wayne Rooney

"Fella's a genius! Best ever by a distance in my life time! Never really saw Pele."Match of the Day presenter Gary Lineker

"Not old enough to see some of the greats but I can't believe anyone can have played the game of football as well as Messi." Former England striker Michael Owen

The striker had time to wait for 20-year-old Leverkusen goalkeeper Bernd Leno to come out before beating him with a magnificently weighted left-foot lob.

Messi doubled the lead when he danced inside from the right before planting a shot into the far corner.

He then began a spell of four goals in 13 manic second-half minutes when he completed his eighth hat-trick of the season with a right-footed lob after Cesc Fabregas had played him in.

Guardiola took the chance to rest the peerless Iniesta and Xavi in midfield, but there was no let-up for Leverkusen as Tello scored within a minute of coming on from another Fabregas pass.

Tello was involved in Messi's fourth as his pass forward was not gathered by Leno to gift the world player of the year a tap-in, and Tello then made it 6-0 on the night with another clinical finish from Dani Alves's pass.

There was still half an hour remaining, but Barca did finally take their foot off the gas before Messi added his fifth with a fine curling effort from 20 yards.

It was incredibly the 88th goal scored by Barcelona at the Nou Camp this season.

Bellarabi momentarily halted the procession with his fine late finish from an acute angle but that did nothing to detract from Barcelona - and Messi's - exquisite display.