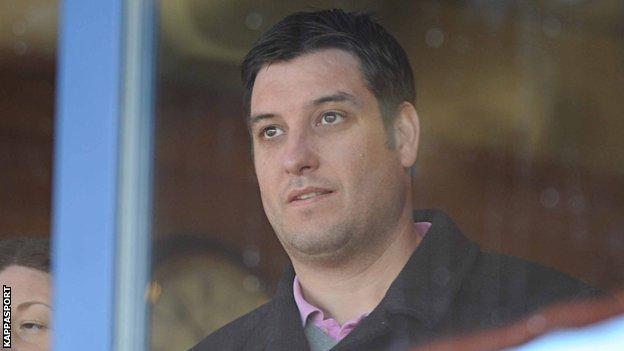 No official takeover can take place until after the club's winding-up petition hearing on 2 April.

A Poppies Trust statement said Rolls had offered it a 24% shareholding and two places on the board.

It said this represented a 'real opportunity' for the Blue Square Bet Premier club's supporters.

The statement continues: "This is something that the Trust has campaigned hard for [for] many years but under Imraan it never came to fruition.

"This is a real opportunity for the supporters of Kettering Town Football Club to have a say in how their club is run. The make-up of the proposed board structure would be one-man one-vote, so the voice of the supporters really will be heard.

"It is the recommendation of the Trust board that this is accepted but we will still be canvassing our members in the coming days for their view."

Karen Spencer, from the Trust, told BBC Northampton: "I don't know about [saying that we are] more confident, but I think we're in a better position than we were a few weeks ago, when we didn't know where the money was going to come from."

Rolls, a former chairman of Cambridge United and Weymouth, sold his family's shares in the Terras and has been acting in an advisory capacity to the struggling Poppies, also donating a 'five-figure' sum to the club.

Ladak led a consortium that took over Kettering Town FC in 2005 with Paul Gasgoigne installed as manager.

Under Ladak's stewardship, the then Rockingham Road-based club went full-time, were promoted to the top flight of non-league football and enjoyed memorable FA Cup matches against Leeds United and Fulham.

There's still a lot of outstanding debt. Everyone's going to give it their best shot

With their lease at Rockingham Road expiring, Ladak moved the club to the former home of Rushden & Diamonds, Nene Park, in August.

However, this season fans staged a protest against Ladak as debts escalated, a player registration embargo was imposed for failure to pay football creditors and a winding up petition was issued by Revenues & Customs.

"We had two or three good seasons and good cup runs and it's been well documented that the Trust and fans have thanked him for that," said Spencer.

"But with the move to Irthlingborough and the appointment of what most fans saw as the wrong manager [Morell Maison], I think we're disappointed that Imraan never really asked for anybody's help or said that we had these bills."

The Conference imposed a £3,000 fine and a three-point deduction in March, and the team are 23rd in the table, seven points from safety.

The Trust state that £42,000 is needed before 2 April "to have any chance of staying in the Blue Square Bet Premier, and to help secure the long term future of KTFC".

Spencer added: "There's still a lot of outstanding debt. Everyone's going to give it their best shot."

A fans' forum has been arranged for 14 March at Nene Park where supporters will be able to ask questions to Rolls.