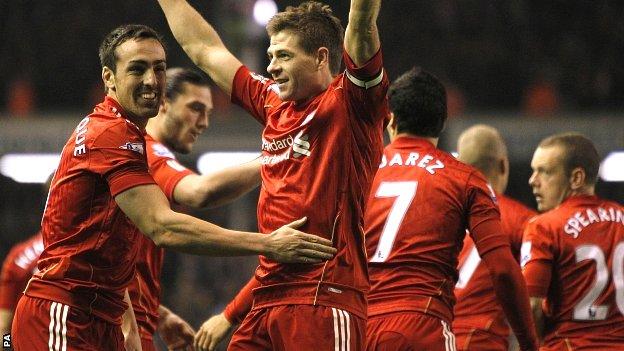 Steven Gerrard's hat-trick ensured there was no happy 10th anniversary for Everton manager David Moyes as Liverpool eased to a comfortable victory in the Merseyside derby at Anfield.

Gerrard scored in the first half and then twice more after the break - including one in the final minute - to earn Liverpool their biggest win against Everton in nine years and ensure Moyes remains without an away derby win in his decade in charge at Goodison Park.

It was also the first hat-trick in a Merseyside derby since Ian Rush scored four in the Reds' 5-0 win at Goodison Park in 1982, and the first at Anfield since Fred Howe achieved the feat for Liverpool in 1935.

The hosts never looked in any danger of a fourth successive Premier League defeat while Everton's much-changed side looked totally incapable of extending their unbeaten run in all competitions to 10 matches.

Gerrard produced contrasting finishes of delicate touch and power to prevent the visitors securing their first win at Anfield since 1999, a result that would have seen them leapfrog Kenny Dalglish's side in the Premier League table.

He was the inspiration, in tandem with Luis Suarez, for a Liverpool performance that carried the vibrancy and rhythm that has been missing from so many of their displays since the turn of the year, despite their

Blues boss Moyes appeared to be aiming a glance in the direction of Saturday's FA Cup quarter-final at home to Sunderland with six changes that saw striker Nikica Jelavic, the left on the bench along with captain Phil Neville, Tim Cahill, John Heitinga and Leon Osman.

Dalglish restored Gerrard to Liverpool's starting line-up and paired Andy Carroll with Suarez - then saw his captain and Uruguayan striker emerge as central figures in the opening 45 minutes.

It took a fine fingertip save from visiting keeper Tim Howard to stop Gerrard as he surged into the area in the opening minutes and even better follow-up tackle from Jack Rodwell to block Jordan Henderson as he tried to turn in the rebound.

Everton's response came from their most creative area of the pitch as Leighton Baines fashioned an opening that Steven Pienaar drove wastefully high into The Kop.

Howard came to his side's rescue again to block from Suarez as he continued to pose problems with his movement and running.

Liverpool made the breakthrough 11 minutes before the interval, just as their neighbours had finally started to exert a measure of control. Gerrard, inevitably, was the man responsible.

Howard saved Martin Kelly's low shot but Gerrard collected the loose ball and had the vision and touch to lift his shot over Everton's keeper and a collection of retreating defenders into the net.

And any hopes Everton had of making a recovery nose-dived six minutes after the restart when Suarez weaved his way into the area and delivered an invitation Gerrard was never going to refuse as he thumped a finish high past Howard in front of an exultant Kop.

Liverpool scented further possibilities, with Carroll shooting just wide and the stretching Kelly only inches away from making a connection in the area with Howard exposed once more.

The visitors' threats had been isolated but Jose Enrique was forced to make a crucial clearance as Rodwell's shot rolled towards goal.

It was the signal for Moyes to send on Jelavic, Leon Osman and Royston Drenthe for Victor Anichebe, Seamus Coleman and Denis Stracqualursi. For Everton, however, there was too much ground to make up.

Moyes's men were reduced to damage limitation but Gerrard was determined to have the final word. And so it proved in the dying seconds, with Suarez once again the provider as he opened up the Blues defence before setting up Gerrard for a simple finish.

Attention will now turn to this weekend's FA Cup quarter-finals when Everton face Sunderland and Liverpool play Stoke. Moyes will hope his ploy of resting key personnel works as his revamped side was outplayed here with ease.