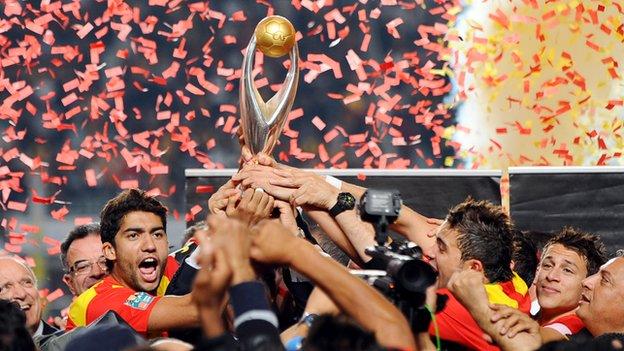 Brikama of The Gambia, Ivory Coast's Africa Sport and APR of Rwanda were among the successful sides in Sunday's African Champions League action.

Amongst the big names missing in the next round of the competition are Tusker of Kenya and Gabon's Missile FC.

Brikama snatched a surprise 1-0 away win in neighbouring Senegal to level their tie with UA Ouakam at 1-1 and won the subsequent penalty shoot-out 3-1.

Their reward is a tie against the current African champions, Esperance.

Ivory Coast's Africa Sport beat Missile of Gabon 2-0 at home to make sure of their place in the next round.

They went in front midway through the first half thanks to a goal from Serge Kouakou and made sure of victory with only eight minutes remaining when Tiemoko Konate scored.

Africa Sport win the tie 3-0 and will play Egypt's Zamalek in the next round, after their victory over Young Africans of Tanzania on Saturday.

APR of Rwanda saw off Kenya's Tusker to book a meeting with former champions Etoile du Sahel in the next round of the African Champions League on Sunday.

APR got the only goal of the tie thanks to their Burundian star Papy Faty.

In Cameroon, Astres Douala had a 2-1 home victory over 9th Arrondissement of Central African Republic but it was not enough to see them through.

9th progress thanks to their away goal after the tie ended 1-1 on aggregate and will go on to meet Sudanese giants Al Hilal in the next stage.

Ethiopian Coffee secured a big home win over Coin Noir Mitsamiouli of Comoros to make sure of a glamour tie with Egyptian giants Al Ahly in the next phase of the tournament.

Berekum Chelsea of Ghana are through to take on Moroccan giants Raja Casablanca, after a 3-0 win over LISCR of Liberia on Sunday.

Jordan Opoku opened the scoring and then Emmanuel Clottey got a second half double to give them the win.

And the Nigerian champions are through as well.

Dolphins were expected to progress after a 3-0 first leg win over Sony de Ela Nguema of Equatorial Guinea in the first leg and they duly delivered with another 3-0 victory at home - Isiaka Olawale, Ifeanyi Egwim and Owusu Addae got the goals.

In Conakry, there was a narrow victory for Horoya of Guinea, whose 1-0 win on the day took them through against Ports Authority of Sierra Leone.

Abraham Sylla got the only goal of the tie - a delightful chip from just outside the area following a good individual build up.

In Benin, home favourites Tonnerre sealed their place in the next round thanks to a 1-0 win over AS Garde Nationale of Niger.

The goal was scored by Mohammed Ahoudou in the 41st minute and takes them through to face Stade Malien in the next phase.

There are a number of ties which have been delayed.

Diables Noir of Congo Brazzaville will play the second leg of their tie with AF Amadou Diallo of Ivory Coast on Tuesday - the game was postponed because of the large explosions which rocked Brazzaville on Sunday.

The second leg match between Muculmano de Maputo of Mozambique and Mafunzo of Zanzibar will take place on Wednesday.

And the delayed tie between Atletico Olypique of Burundi and AS Vita Club of DR Congo will be played over two legs, starting next weekend.