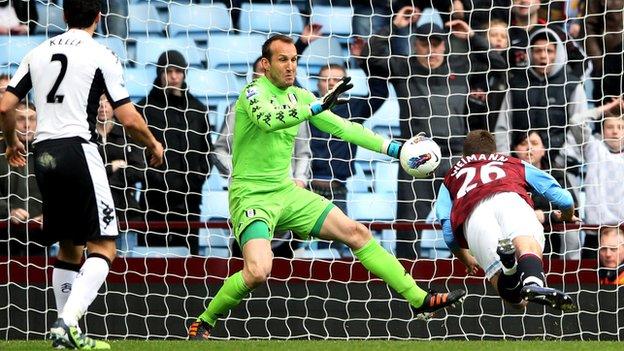 Villa had dominated the first half with Gabriel Agbonlahor going closest.

Marc Albrighton struck the bar for the hosts early in the second period, then Damien Duff hit a post for Fulham.

Villa won it in injury time when Fulham keeper Mark Schwarzer failed to hold a Gary Gardner shot and the Austrian bundled the follow-up over the line.

The Villa crowd had been growing frustrated before that moment of relief as their team looked on course for an eighth game without a win at Villa Park, which would have been their longest barren spell in 91 years.

There were some boos when Charles N'Zogbia was taken off with 19 minutes to play, so manager Alex McLeish will have been delighted that the man he brought on scored the winner.

Fans' frustrations have been affecting performances according to forward Agbonlahor, but they were ecstatic at full-time as their side finally made the breakthrough having probed for long periods without showing a cutting edge though Schwarzer should have done better than push the ball straight back to Weimann.

The result for Villa was all the more impressive considering the run that Fulham had been on. They had taken 16 points from the last eight games and came into this match on the back of a 5-0 win over Wolves thanks to a Pavel Pogrebnyak hat-trick.

"Alex McLeish's side had far more opportunities and had been in far more promising situations in the first half but failed to finish them off. You could sense anxiety around Villa Park. Not everyone agreed with the substitution of Charles N'Zogbia after 70 minutes. It was a relief for McLeish when Andreas Weimann scored."

The Cottagers had won three games in a row, with Pogrebnyak's five goals in his first three matches in England being a key factor, but he was quiet as the visitors looked below their best despite improving in the second period.

Recent form had no bearing on the early stages, however, as out-of-form Villa dominated. They appeared full of confidence, with Stiliyan Petrov shooting from distance repeatedly in the early stages.

Albrighton set up N'Zogbia, who shot wide from 15 yards, then had a chance himself but headed straight at Schwarzer.

Fulham could not keep hold of possession and, when captain Danny Murphy gave the ball away sloppily, Agbonlahor charged through and forced a good save from the Australian keeper.

Next it was James Collins' turn to miss a chance, shooting wide from eight yards. It was typical Villa of recent times - failing to turn pressure into goals.

Fulham's Murphy was angered when blood started pouring down his face after he was struck accidentally by Stephen Ireland. But the rest of the first half was low key.

Duff single-handedly enlivened the visitors after the break, firing in a series of teasing crosses.

Both teams were getting closer and the woodwork was struck at either end. Albrighton was first to do so, rattling the bar from 16 yards after Ireland's cut-back from the right. Duff then hit the near post from 10 yards after being played in by John Arne Riise.

The game looked to be fizzling out in the latter stages until Gardner - who had come on seconds earlier - took a long-range shot, which led to Weimann pinching the points in dramatic fashion.

Aston Villa manager Alex McLeish: "The dug-out can be a very tense place to be. The fans' expectations are massive. The more you lose and don't win, the fans are going to get on your back.

"I ran past the visiting dug-out when we scored. I didn't mean any offence to Martin Jol. It was just a reaction, more of relief than anything else.

"We had a good feeling about Weimann. I said to my coaches beforehand that we had to get him into the game."

Fulham manager Martin Jol: "We wanted a victory. I feel bad. Nil-nil would have been a good result but we could have nicked it.

"We should have scored a goal but we didn't. One or two mistakes can cost you and that's what happened."