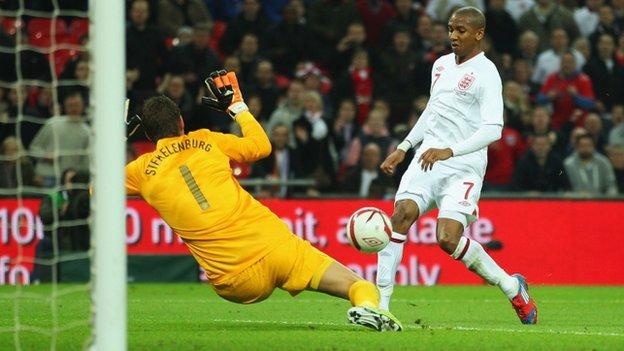 England caretaker manager Stuart Pearce insists he will be happy to take control for Euro 2012 - but does not believe he is the long-term option.

England lost 3-2 to the Netherlands in a friendly as Arjen Robben's late winner halted a comeback that looked to have earned Pearce's side a draw.

But the emphasis will now turn to the search for Fabio Capello's replacement.

"I would be confident taking the squad to the Euros, that wouldn't daunt me at all," said Pearce.

"I don't think after that period I have the experience for the job. All I'm doing is buying the Football Association some time.

"The full-time manager of England at this moment in time is probably somebody else, not me."

In an eventful second half at Wembley, Robben and Klaas Jan Huntelaar looked to have given the Dutch a comfortable win.

But two goals in the last five minutes from Gary Cahill and Ashley Young put England on course for a draw before the Bayern Munich winger's late strike.

Pearce was happy with the efforts of his players, but admitted that their lack of experience was shown up in the defeat by the more experienced Dutch, who reached the 2010 World Cup final in South Africa.

He said: "When you lose a goal at that stage of the game, maybe you need a bit of know-how or nous to see the game out or maybe even chase the game a bit.

"It is disappointing but the object of the exercise was to learn and we came up against an outstanding side with some really outstanding international footballers such as Arjen Robben and Robin van Persie. The exercise will stand our young players in good stead."

England suffered injuries, Liverpool's Steven Gerrard going off in the first half with a hamstring injury, while Manchester United defender Chris Smalling sustained a head injury challenging Huntelaar before the second goal and Chelsea's Daniel Sturridge hurt his toe.

"Steven was more precautionary," said Pearce. "He felt a bit tight and my plan was only to play him for 45 minutes.

"Chris got a real bad bang on the head and split his head open. I spoke to him as he came off the field and he was conscious, which was a real blessing."

Pearce explained his decision to name Scott Parker as captain, saying: "There were two or three strong candidates but I felt Scott would possibly grow with the role. I have seen his interaction with the other players.

"He is very well respected and an extremely unselfish player. Put all those things into the mix and I thought he would be the ideal man to captain the team."

Captain Parker said he would like to keep the captain's armband after being handed it on the morning of the game.

The Tottenham Hotspur midfielder told BBC Radio 5 live: "It's been a special night for me for many reasons.

"I'm absolutely delighted to lead out my country. It's what every boy dreams of and I was no different, so to get the chance was amazing really.

"The manager told me that I'd be leading the side this morning in the team talk. He just sprung it on us, first thing this morning.

"It was pretty emotional. It was an immensely proud moment for me and something I'll always cherish.

"I would love to keep the armband. I don't know if it was just this game or for the future but I'm proud and I'll do my best."

On who should succeed Capello, Parker acknowledged the speculation linking his club manager Harry Redknapp with the job.

"There's a lot of talk about Harry Redknapp coming to England," admitted Parker. "And I'm sure he's got a very good chance. But the players need to know our role. We understand that and will crack on."