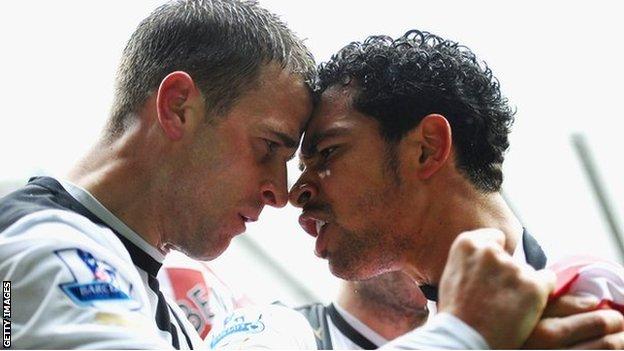 Shola Ameobi snatched a late equaliser to rescue a point for Newcastle in a bad-tempered derby against Sunderland, who had two players sent off.

The visitors had Stephane Sessegnon dismissed for elbowing Cheick Tiote while Lee Cattermole was given a straight red after the final whistle.

Cattermole's dismissal, for foul and abusive language, capped a stormy Tyne-Wear derby, in which tempers boiled over at frequent intervals.

Sunderland have now had four players sent off in their last four Premier League games against Newcastle - Phil Bardsley in August's 1-0 home defeat and Titus Bramble in the 5-1 thrashing in October 2010.

Black Cats skipper Cattermole was fortunate not to join the list of shame as early as the opening minute after an ugly tackle on Newcastle's Ivory Coast midfielder Tiote, a challenge that set the tone for another bruising encounter between the north-east neighbours.

Newcastle's Yohan Cabaye was also cautioned for hacking down Bardsley in a frantic opening, in which chances were at a premium and referee Mike Dean had his work cut out.

James McClean, fresh from making his senior Republic of Ireland debut in midweek, only added to the simmering tensions with a yellow-card challenge on Danny Simpson, whose angry reaction also earned a caution.

It was all extremely unsavoury and the game was crying out for cool heads from both sides, yet too few players were willing to oblige.

Indeed Dean was forced to reach for his pocket yet again after awarding a penalty in the 24th minute against Newcastle centre-half Williamson for trying to rip the shirt from Michael Turner's chest while defending a free-kick.

Up stepped Bendtner to beat Tim Krul from the resultant penalty, to score his fourth goal since joining on loan from Arsenal in August.

It said much about the home team's lack of creativity that Sunderland keeper Simon Mignolet only had one serious save to make before the interval when he kept out Fabricio Coloccini's 39th-minute header.

Newcastle were sluggish and lacklustre and the closest they came to an equaliser before half-time was Demba Ba's 44th minute header from Ryan Taylor's corner which hit the bar.

Sunderland, who went close to doubling their lead through Bendtner and McClean, were far too comfortable after the break.

But they were reduced to 10 men with more than half an hour remaining when Sessegnon was given his marching orders for striking Tiote.

The dismissal revitalised the home side and it took a superb save from Mignolet to deny Hatem Ben Arfa a 77th-minuter equaliser when he cut in from the left to blast a left-foot shot.

The Frenchman was adamant he should have been awarded a penalty two minutes later after he went down under McClean's challenge, but Dean did point to the spot again when Ameobi was tripped by fellow substitute Fraizer Campbell.

Ba struck the penalty low to Mignolet's left but the Belgian made a fine save to preserve his side's lead.

However, with the clock having ticked into the first minute of injury time, Ameobi stabbed home Wilkinson's flick-on from close range to snatch a point with his seventh derby goal.