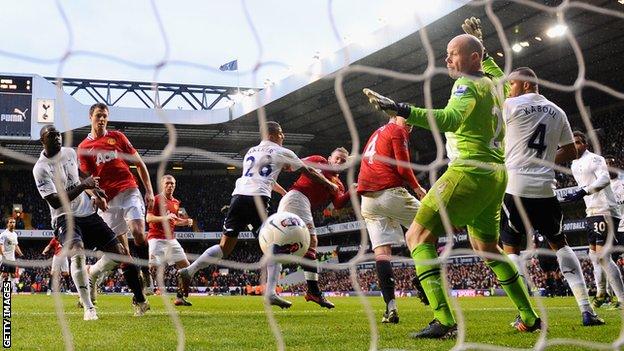 Roberto Mancini's side extended their advantage to five points by beating Bolton Wanderers on Saturday - but United responded in style at White Hart Lane to close the gap once more.

Spurs, wounded by the 5-2 thrashing at neighbours Arsenal last Sunday, were the better side for spells and had an Emmanuel Adebayor strike ruled out for handball before Wayne Rooney headed United in front on the stroke of half-time.

And Sir Alex Ferguson, who surpassed Sir Matt Busby's Old Trafford record by taking charge of his 986th league match, watched on in delight as two spectacular strikes after the break from Ashley Young secured the points.

He scored with a spectacular far-post volley on the hour then improved on that nine minutes later with a long-range curling effort that flew into Brad Friedel's top corner with the Spurs keeper helpless.

Substitute Jermain Defoe pulled a goal back for Spurs with three minutes left but it was no consolation as they saw their lead over fourth-placed Arsenal reduced to four points.

It was a sobering day for Spurs manager Harry Redknapp, whose side's mini-slump has coincided with him emerging as favourite to replace Fabio Capello as England coach.

There were mitigating circumstances for Spurs here, with new England captain Scott Parker suspended after being sent off at Arsenal, Rafael van der Vaart injured and Gareth Bale a late withdrawal because of illness.

Even so, they acquitted themselves well for long periods - but simply could not muster the same firepower as United, who were helped in their mission by shoddy Spurs defending.

Ferguson flagged up the importance of victory in the build-up and the result was simply confirmation that they will lurk in City's shadow in the hope the pressure in the closing stages will affect their neighbours.

The United boss had Rooney back after a throat infection to bolster his side as they attempted to respond to City's victory.

The first half contained plenty of quality in possession but little end product - at least until Spurs thought they had made the breakthrough as the interval approached. Aaron Lennon escaped Phil Jones and played in Louis Saha, but Adebayor controlled the ball with his arm before turning in.

Spurs fans were vociferous in their protests and their sense of injustice increased as United took the lead, somewhat against the run of play, moments before half-time.

Sandro was booked by referee Martin Atkinson for a foul on Young, whose free-kick was cleared behind for a corner by Spurs. Rooney was then able to take advantage of slack marking to head Young's resulting corner past Friedel.

De Gea, who had earlier distinguished himself with a save from Adebayor, came to United's rescue once more six minutes after the restart with another low block from Jake Livermore's deflected shot.

Spurs were applying most of the pressure at this stage and De Gea was grateful to see Benoit Assou-Ekotto's free-kick glance off the bar, although the young Spaniard appeared to have the shot well covered.

But just as Spurs sensed a recovery, it was snuffed out. And the hosts were engineers of their own downfall as Young scored United's second.

Luka Modric switched off at a throw-in, allowing Nani to steal behind him and break into the box. Kyle Walker's attempted clearance from the centre ballooned into the air and Young was on hand to volley past Friedel.

Young was the marksman again as United ended any doubts about the result, picking up Patrice Evra's pass 30 yards out before delivering a precise finish high beyond the stretching Friedel.

Spurs, understandably, were deflated although Defoe did find the target in the closing stages with a shot from 20 yards that left De Gea stranded.

United have now passed two crucial away tests at Norwich City and Spurs - setting up the prospect of a fight to the finish in the title race.