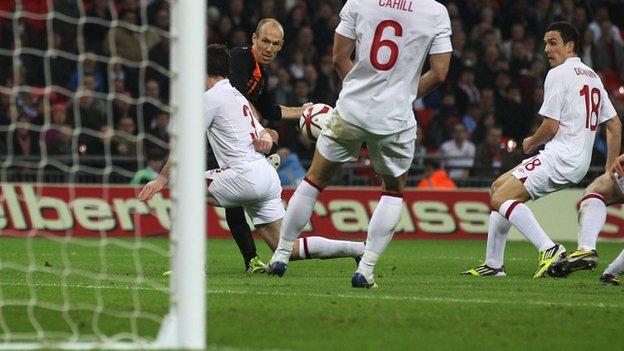 England looked to have rescued a creditable draw in the first match since coach Fabio Capello's resignation as goals from Gary Cahill and Ashley Young in the last five minutes drew them level after Robben and Klaas Jan Huntelaar put the Netherlands in charge early in the second half.

Robben, who illuminated Wembley with a magnificent solo effort to put the Dutch ahead, then had the final word with another quality finish that curled beyond England goalkeeper Joe Hart to give the visitors victory.

The goals deflated a Wembley crowd that had been looking for signs of encouragement as the post-Capello era started with Pearce in charge and Tottenham's Scott Parker taking the captain's armband from the deposed John Terry.

Robben exposed glaring frailties in England's defence when he ran from inside his own half to put the Netherlands ahead early in the second half. Huntelaar quickly added a second with a spectacular header that resulted in injuries to the Dutch striker and England defender Chris Smalling, who was carried off on a stretcher after the collision.

Cahill and Young then lifted England's hopes but Bayern Munich winger Robben was not in the mood to let Pearce claim anything after taking the reins from Capello, and proved the match-winner.

England and Liverpool suffered a blow when Steven Gerrard lasted only 33 minutes of his first international appearance since November 2010.

"There were some decent individual performances and there's a few players who will be going away believing that they have done their chances of making the squad no harm whatsoever.

But what have we really learned from that 90 minutes?

It's fair to say that the Netherlands didn't always play with a high tempo yet you could still see the quality that they possessed.

For England, the real test will come against the likes of France, Sweden and Ukraine in Donetsk and Kiev in 14 weeks time because it is all about what you do in the tournament."

But Pearce said afterwards the midfielder was taken off with a tight hamstring as a precautionary measure.

England almost gave their caretaker manager and new captain the perfect start after seven minutes when Cahill met Young's corner at the near post with a glancing header that was inches over the top.

Parker received a warm reception from the Wembley crowd when his name was announced - and further endeared himself to England's supporters with brave blocks from Wesley Sneijder and Robin van Persie as well as a powerful challenge on the Arsenal striker to win possession.

The pace and thrust of Robben was an obvious threat and he forced Hart into action with a powerful angled drive that the England keeper did well to beat away to safety.

Manchester City winger Adam Johnson was a lively performer for England as he attempted to make the most of his place in the starting line-up, giving the Dutch an anxious moment with a shot that deflected wide off John Heitinga.

It had been encouraging rather than exhilarating start from England and they suffered a setback when Gerrard was withdrawn to sympathetic applause and consoling words from Pearce.

This allowed Daniel Sturridge to join the action as another of England's young striking options got the opportunity to impress in the absence of the injured Darren Bent and Wayne Rooney, who pulled out of the squad with a throat infection.

The Chelsea striker looked lively after his introduction, and almost opened the scoring after 48 minutes when keeper Martin Stekelenburg dived low to his right to save from 12 yards.

But the frailty of this patchwork England side was ruthlessly exposed by Robben after 57 minutes when he picked up the ball in his own half and ran unchallenged before firing powerfully past Hart, who was left with no chance.

It was a moment of stunning work from Robben but the defender in Pearce will have been aghast at how he was allowed to run so far without hindrance by England.

The contest looked over seconds later as Dirk Kuyt escaped down the right flank and provided an inviting cross for Huntelaar to rise superbly, despite the attentions of Smalling, to head past Hart.

Both players were hurt in the clash of heads that came with the aerial challenge, Huntelaar sustaining a nasty mouth injury while Smalling was carried off on a stretcher and replaced by his Manchester United team-mate Phil Jones.

Despite the quality in the opposition ranks, England were still creating chances as substitute Stewart Downing volleyed wide and Sturridge missed a glorious opportunity when he gave Stekelenburg the chance to save with a weak finish from eight yards.

Pearce gave Sunderland's Fraizer Campbell a late debut and England gave themselves hope when defender Cahill appeared in the area to turn neatly and beat Stekelenburg.

Young's composed finish even had England and Pearce dreaming of a win - but Robben produced one more moment of magic deep into injury time.