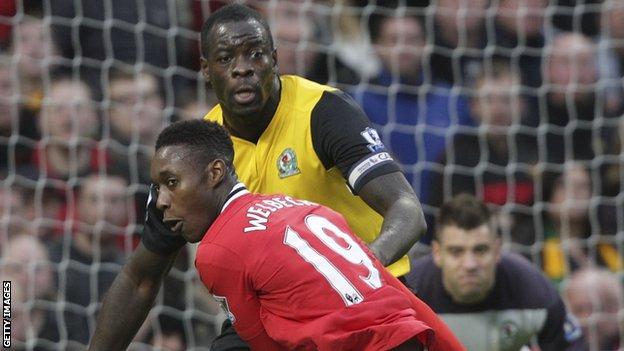 Blackburn Rovers have confirmed Chris Samba has completed his move to Russian side Anzhi Makhachkala for an undisclosed fee.

The 27-year-old handed in a transfer request in January and has not played for Rovers since their 2-1 defeat by Stoke at the start of last month.

Samba was allowed to complete the deal because the Russian transfer window did not close until 2000 GMT on Friday.

"I see it [the move] as a new challenge," Samba told Sky Sports News.

"It's a little club who want to become a very big one in Russia. A very powerful owner wants to transform the club and bring the club to greatness."

Samba has joined the growing list of star names signed by the club since billionaire Suleyman Kerimov became owner in January 2011.

Since then, they have named Guus Hiddink as manager and snapped up players such as Brazil World Cup 2002 winner Roberto Carlos, Chelsea full-back Yuri Zhirkov and Inter Milan striker Samuel Eto'o.

The France-born centre-back joined Rovers in 2007 from Hertha Berlin and made 184 appearances for the Premier League outfit in all competitions, scoring 18 goals. He will wear the number 22 shirt at Anzhi.

Speaking at a press conference on Friday, Rovers assistant manager Eric Black backed his players to cope in Samba's absence.

He said: "He hasn't played for a few weeks and our performances have been exceptional.

"Obviously there was a blip at Arsenal, but again, you look at the performances against Newcastle, Fulham and QPR and the guys that have been in there have done exceptionally well."

Blackburn travel to Manchester City on Saturday to play the Premier League leaders and sit one place outside the relegation zone in 17th place in the table.

Anzhi are based in Russia's Dagestan republic, which borders Georgia and Azerbaijan. They were founded in 1991 but enjoyed little success until the arrival of Kerimov.

The team's players live and train in Moscow due to security problems in Makhachkala and travel nearly 1,250 miles for home matches.

Anzhi are currently in seventh place in the Russian Premier League. Samba's first league fixture could be on 5 March against Dynamo Moscow when the season recommences after the winter break.