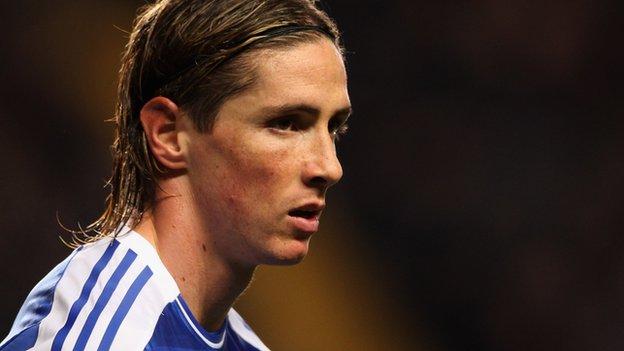 The Hammers asked to take 27-year-old Torres from Chelsea for one to two months but their approach was rejected.

We couldn't have afforded to pay all his [Tevez's] wages but we would have done a deal. We would love to have taken him for the rest of the season

"We had two irons in the fire. If we'd pulled one off it would have been exciting but it wasn't to be," he said.

The Championship side inquired about the Premier League stars before they signed striker Nicky Maynard from Bristol City and fellow forward Ricardo Vaz Te from Barnsley.

"At the time this was happening, we hadn't made any signings," said Gold.

"We weren't scoring goals and we felt that Torres was a bit out of favour at the time and we thought maybe Chelsea would let Torres go for a month or two to let him get his sharpness back. It was more of an enquiry than a bid.

"They were playing him as a bit-part. We desperately needed a striker and we also believed he would be lethal in this division so it could have been a good thing for both clubs."

European Championship and World Cup winner Torres has been a shadow of his former self since joining Chelsea from Liverpool for a British transfer record £50m in January 2011.

In his first half-season at Stamford Bridge he scored once in 18 appearances, coincidentally against West Ham, while this season the Spaniard has made 21 appearances (eight as substitute), scoring four goals.

Gold said co-chairman David Sullivan had worked hard in an effort to secure Tevez, who has not played since a row with City manager Roberto Mancini in September.

"At one time we really thought they might go along with the idea which was to take the responsibility of keeping him fit," said Gold.

"We couldn't have afforded to pay all his wages but we would have done a deal. We would love to have taken him for the rest of the season."

The Argentine striker was a Hammers fans' favourite when he helped the club survive relegation in the 2006-07 season before moving to Manchester United.

He joined Manchester City in 2009 for £25.5m on a five-year contract and made an immediate impact, scoring 29 goals in his first season and 24 the next as City qualified for the Champions League for the first time.

However, his relationship with the club has since soured after he refused to come on during a Champions League game against Bayern Munich last September.

He was subsequently suspended and fined four weeks' wages (reduced to two weeks' following intervention by the Professional Footballers' Association) by the club before travelling to Argentina, where he remained, without City's permission, from 7 November until he returned to Manchester last week.

Despite his difficulties at City, Tevez remains a sought-after player. He was linked with moves to Inter Milan, AC Milan and Paris St Germain during the transfer window but nothing materialised.

"Sometimes you need to bring in somebody like him. He would have lifted the crowd and kept morale high," said Gold.

Gold added that despite missing out on Torres and Tevez, he was happy with the club's transfer business, especially the capture of Maynard, who scored 46 goals in 131 games for Bristol City since joining them from Crewe in July 2008.

"Maynard was our target and he came to us on the last day, and I think he's going to be special," he said.