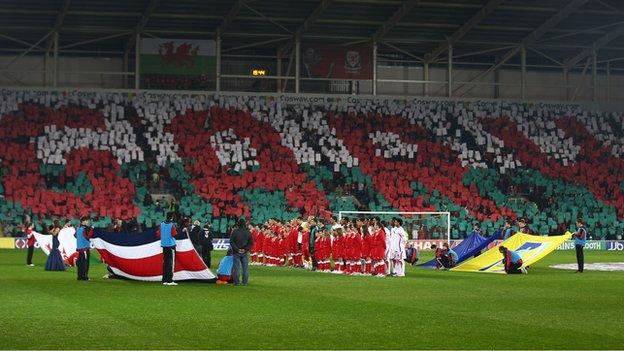 Wales were beaten 1-0 by Costa Rica in a match to honour former coach Gary Speed, who died in November aged 42.

Speed's father gave a pre-match talk to the Wales players, while his two sons, Ed and Tom, led Wales onto the pitch with captain Craig Bellamy.

There was a round of applause before the game at Cardiff City Stadium.

Fans at one end of the ground spelled out the name "Gary" with coloured cards during the pre-match anthems.

Costa Rica secured victory with a seventh-minute goal by Joel Campbell in a match that also marked Chris Coleman's debut as Speed's successor.

Striker Steve Morison went closest to an equaliser for Wales, his first-half header hitting the bar, while Bellamy and Hal Robson-Kanu also had chances.

But the Costa Ricans could have won by a bigger margin, Kenny Cunningham hitting the post in a quick second-half breakaway.

Wales had invited Costa Rica to take part in the tribute match because Speed had won the first of his 85 international caps, a Welsh outfield record, against the Central American country at Ninian Park in May 1990.

And the hosts were dealt a further blow when Campbell, the teenage Arsenal striker on loan at French club Lorient, gave the visitors the lead with a lovely finish.

The 19-year-old cut in from the left to play a delicate one-two with Fulham's Bryan Ruiz before slotting the ball into the bottom corner of the net.

Bellamy came close to drawing Wales level after the break but failed to find the net after Joe Allen's presence had unsettled Michael Umana in the Costa Rica defence.

Bellamy, in what could yet prove to be his last international, was substituted by Robert Earnshaw in the 74th minute. Earnshaw thought he equalised in the latter stages but his strike was ruled out for offside.