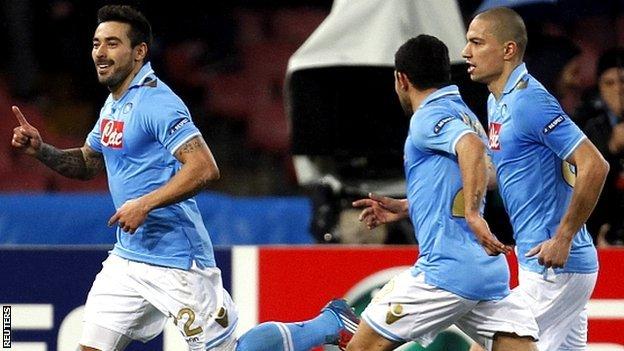 The visitors edged ahead against the run of play as Juan Mata sidefooted home a volley, but Napoli roared back.

Ezequiel Lavezzi fired in from 20 yards and then Edinson Cavani helped home Gokhan Inler's cross before the break.

Chelsea had chances to level but Lavezzi punished David Luiz's mistake to grab a third and cap a fine display.

The defeat extends the Blues' winless run to five matches and will further weaken the position of manager Villas-Boas, who has admitted lacking both and .

Having lost skipper John Terry to injury only hours before the match, the former Porto boss dropped striker Fernando Torres, who had failed to score in his last 20 Chelsea appearances, to the bench but even with Didier Drogba restored to face a Napoli defence that never looked comfortable, the Italian side were deserving winners.

When Daniel Sturridge's innocuous pass slipped over Paolo Cannavaro's foot, looping up invitingly for the lurking Mata to slot past Morgan De Sanctis on 27 minutes, hopes were raised among the away fans that Chelsea might succeed where

But those hopes dimmed as the opening goal failed to blunt the hosts' attacking instincts, manifested most effectively in the probing passes of Lavezzi and Christian Maggio's marauding runs.

Goalkeeper Petr Cech had done well to deny Cavani early on and had Luiz not headed over after beating Morgan de Sanctis to a corner, a 2-0 deficit would have done Napoli a significant disservice.

As it was the scoreline at the interval gave a fairer reflection of the first-half balance, as Lavezzi and Cavani struck in the space of eight minutes to transform the mood in the Stadio San Paolo.

"Napoli have edged this game deservedly, but I still don't rule out Chelsea going through at Stamford Bridge. I don't think it's over yet but defensively Chelsea have to get better."

Raul Meireles's decision to track a runner rather than advance on Lavezzi was brutally exposed as the Argentine found the bottom corner of Petr Cech's goal from the edge of the area before Cavani nudged home Gokhan Inler's raking cross with his shoulder.

Both sides' defences looked brittle at the start of the second half as an open game swung from end to end.

But it was the Chelsea rearguard that was to be breached again as Luiz's tentative attempt to clear Hugo Campagnero's ball forward was seized on by Cavani who swept the ball across for strike partner Lavezzi to finish.

The pressure that Chelsea had been building before the third goal dissipated and, despite the arrival of Michael Essien and Frank Lampard, it only reached its previous pitch in the final five minutes.

But such was the nature of the game that Chelsea could have been further adrift by that stage, Maggio's effort having to be cleared off the line by Ashley Cole, and the early promise of Mata's goal quickly fading from memory as thoughts turned to a difficult return leg at Stamford Bridge on 14 March.