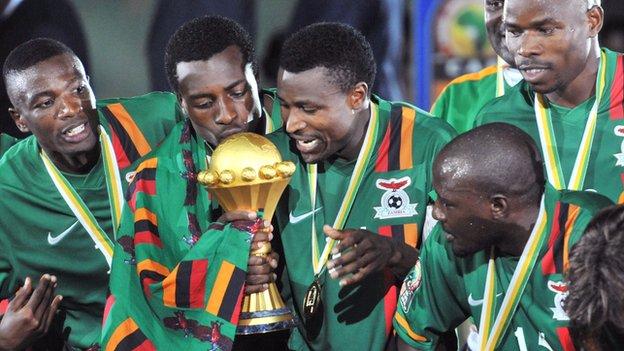 After 14 kicks were converted, Kolo Toure and Gervinho failed to find the target for the Elephants as Zambia's Rainford Kalaba also blazed over.

But Stoppila Sunzu found the top corner to complete an amazing 8-7 victory.

It was a heartbreaking end for Ivorian skipper Didier Drogba, who missed a spot-kick in normal time.

And it means the wait goes on for an Ivory Coast team replete with many Premier League and European stars, with the country losing the 2006 final to Egypt in the same way and last winning the title 20 years ago.

For the Chipolopolo, who have already been runners-up twice, it concluded a tournament where they were inspired by the loss of the 1993 Zambian team after a plane crash close to the venue of the final in Libreville.

The last time the southern African country reached the final in 1994, it was just a year after 18 Zambian team members died as they took off from the Gabonese capital.

En route to the final, the current team had spoken of the strength they had gained in remembering that tragedy.

And in winning the shoot-out, they showed a steely determination to beat their supposedly more illustrious opponents with a performance that was built on an indefatigable spirit.

Having more than matched the Ivorian team throughout the 120 minutes of play, they showed greater composure when the contest came down to the crunch.

Drogba's penalty miss after the hour mark was startling, as he smashed the ball way over the bar after Gervinho was pushed over.

But Zambia were also unlucky as Boubacar Barry made two crucial saves at opposite ends of the match, first stopping Nathan Sinkala's shot from a well-worked corner and then poking Chris Katongo's shot onto the post in extra-time.

Between those chances, Yaya Toure shot off-target from 10 yards and, although Francois Zahoui's team showed some impetus at times, they rarely tested the impressive Zambia keeper Kennedy Mweene, who also scored in the mammoth shoot-out.

With Zambia conceding just three goals en route to the final and Ivory Coast none, the game was never likely to be an open contest.

And as the game progressed, the belief in the Ivorian team seemed to shrink.

Buoyed by their vocal coach Herve Renard, Zambia always posed a threat from their well-worked set-pieces and it certainly appeared that fate was on their side when Chelsea forward Drogba missed from the spot.

Spurned on by that miss, substitute Max Gradel injected some urgency into Zahoui's side as they pushed for a winner and the former Leeds forward was inches from scoring after Wilfried Bony's knock down.

Although Didier Ya Konan and Kalaba both went close for either side in extra-time, they could not prevent the game being decided by the engrossing shoot-out.

Drogba made amends for his earlier miss by scoring his team's fifth kick, after Souleymane Bamba was fortunate to earn a second chance having missed his first effort.

Mweene was penalised for encroachment on that occasion, but he was the coolest man on the pitch as he took it to sudden death.

That left Sunzu to make the most of misses by Kolo Toure and Gervinho, sparking wild celebrations for a triumph which almost seemed scripted.