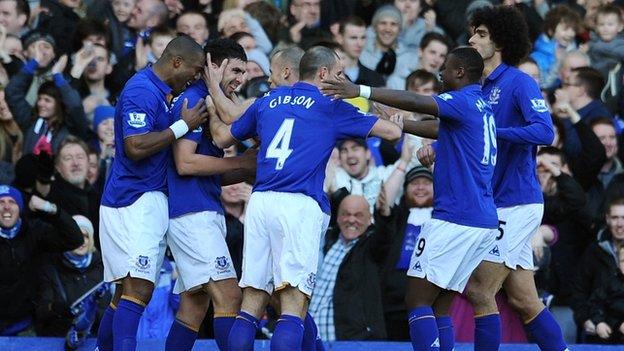 Denis Stracqualursi then made it a dream start for the hosts on six minutes when he tapped in.

Stracqualursi could have added to his total as Everton had chances to put the tie out of sight, while Kevin Phillips blazed over a penalty late on.

The veteran striker hit the bar from a free-kick with Lomana LuaLua also hitting the post, but they were isolated efforts for the visitors, who also lost Gary Taylor-Fletcher as a result of a first-half collision with Everton keeper Tim Howard.

Those events summed up a miserable afternoon for Ian Holloway's team who were outclassed by their Premier League opponents and will now return to their battle for Championship promotion, starting with a key game at home to West Ham on Tuesday.

For Everton, the victory extends their unbeaten run to seven games during what has been a profitable period which has included wins over Chelsea and Manchester City at Goodison.

Blackpool's poor start to the game was at odds with a run that has seen them go 10-games unbeaten since the turn of the year.

Holloway's men were up against top-flight opposition for the first time this season and they ran into an Everton side brimming with confidence.

But the way in which they were two goals behind within six minutes quickly mapped out a game in which they failed to wrest any sort of control.

Holloway had made seven changes to his side following Tuesday's win over Doncaster. The team had barely got their bearings when Drenthe found the top corner after Fellaini teed up the Dutchman after Magaye Gaye had delivered a cross.

That lead was soon doubled after six minutes when Drenthe's corner found Gaye. His header was blocked, but Stracqualursi tapped in for his second goal in two FA Cup starts.

Taylor-Fletcher managed one effort for Blackpool in reply, but he was injured and subsequently stretchered off in a lacklustre Blackpool showing.

Everton were without Landon Donovan, who missed what would have been his last game for the club before returning the United States after a loan spell, and the cup-tied Steven Pienaar.

But they still created a host of chances with Stracqualursi twice going close, Matt Gilks saving from Darron Gibson and Johnny Heitinga heading off target.

Holloway perhaps chose his starting XI with Tuesday's game against West Ham in mind, and it was not until he made changes midway through the second half that his side made any telling impression on the game.

Still, Fellaini could have scored twice thereafter - firing over from six yards following a shot that was cleared off the line by Craig Cathcart.

LuaLua's strike against the post and Phillips's spot-kick miss were only late flutters for Everton in a contest they should have settled much earlier.

Everton boss David Moyes: "I think when you play Blackpool you are never in control. They score lots of goals in the last five minutes of games. Our goalkeeper Tim Howard made a brilliant save and they missed a penalty kick, so they had opportunities.

"We had six or seven great chances to put the game to bed and we didn't get the third goal. While it was still 2-0, Blackpool kept going."

Blackpool manager Ian Holloway: "We have been beaten by the better team today, but I thought we showed character to come back into it later on in the game. A lot of teams I've had in the past might have gone completely and capitulated there, but we managed to haul ourselves back into it.

"But we were nowhere near as good as we normally are because David has a great team here."