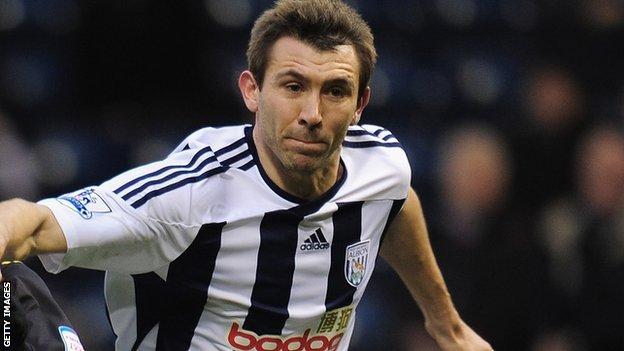 The Baggies have taken eight points from 12 home games in the Premier League, scoring only nine times.

"It's becoming a bit of a monkey on our backs, we'll probably have to sit down as a group and talk about the situation," McAuley told BBC WM.

"People have ideas and have their views - we need to give the crowd something to cheer."

Swansea City became the eighth visiting team to emerge victorious from the Hawthorns at the weekend despite Albion taking the lead through Marc-Antoine Fortune.

Wolves and Bolton are the only teams to have left empty-handed, leaving Roy Hodgson's side reliant on an outstanding away record to keep the heads above water - five wins on the road to date.

"We've got to stay strong mentally. We've got to stick together as a group, and when the next game comes around work as hard as we can to try and change that around," noted McAuley, 32.

"We're not resting on our laurels. We've got a target of getting to that 40 points to start with and kicking on from there if we've got any games left. That's been the target from when I came to the club really."

The Baggies have a six-point cushion from the Premier League's relegation zone, and are preparing for Sunday's Black Country derby against Wolves at Molineux - a challenge McAuley relishes.

"It's an away game so hopefully it suits us and we can go and put a performance on there to cheer people up and get the enthusiasm back coming into the home game after."