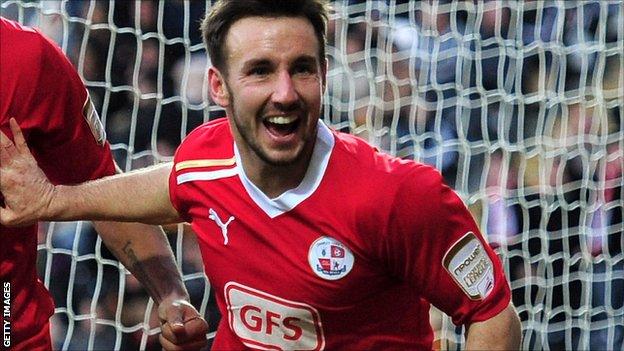 Matt Tubbs said he was delighted to score on his debut and help Bournemouth defeat Exeter City 2-0 on Tuesday.

Tubbs, 27, signed for the Cherries in January from Crawley Town for a club-record fee and the Verwood-born forward made the perfect start at his new club.

"On your debut you want to try and get your first goal as quickly as you can and I was lucky enough to get mine tonight," Tubbs told BBC Radio Solent.

Tubbs's goal and a further effort from Scott Malone sealed their victory.

The goal sees the Cherries move up to eighth in League One and two points off the play-off places.

It was great to be back. This is my home-town club and the one I supported as a kid

Tubbs admitted it had been a frustrating evening, but the introduction of Malone in the 68th minute made a huge difference.

"I've only been here a week but you can see the quality that Scott Malone has and he makes my job easy," added Tubbs.

"They came with a game plan and stuck to their task and limited us. But in the second half we came out all guns blazing and normally when you get one then a second is not too far away."

Tubbs, who was taken off in the 89th minute, continued: "It was great to be back. This is my home-town club and the one I supported as a kid. The standing ovation at the end was nice."

He was reunited with former Crawley striker Wes Thomas and Tubbs says he can see potential in the partnership.

"Wes is a good friend of mine. He works his socks off and hit the bar and was unlucky," Tubbs added.