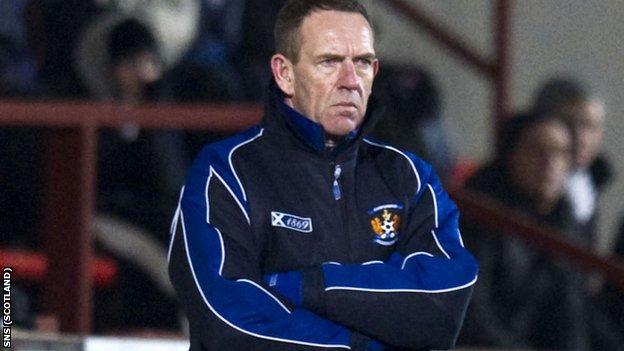 Kilmarnock manager Kenny Shiels says his players need to do everything they can to get into the top six following their 1-1 draw with Dunfermline.

James Fowler's opener for Killie after 21 minutes was cancelled out by Andy Kirk near half-time, leaving Shiels frustrated at the club's away form.

"What can you do?" Shiels told BBC Scotland after the match.

"It's very frustrating for a manager to put his team out to attack and you're not getting your just desserts."

Fowler's deflected shot got the visitors off to a flying start at East End Park, but Kirk beat the offside trap to score with just 60 seconds of the first-half remaining, and, despite dominating the second half in terms of chances, Shiels' men couldn't find a winner.

However, the point earned from the draw allowed Kilmarnock to leapfrog Dundee United into seventh place, and Shiels is determined to achieve a top-half finish in the Scottish Premier League.

All we can do is keep doing what we're doing, because the away results haven't matched the performances - and here again, we draw another game away from home

"On reflection of the game, we're really disappointed not to have won," addedShiels. "I'm trying to be as unbiased as I can.

"It's been our whole season away from home. I can count almost every game we've played away from home that's been similar to that.

"We're not getting goals for some reason.

"All we can do is keep doing what we're doing, because the away results haven't matched the performances - and here again, we draw another game away from home.

"We're fighting to get into the top six and I'm really disappointed that we didn't get a result tonight for everyone at the club because it would have given us a three points cushion."