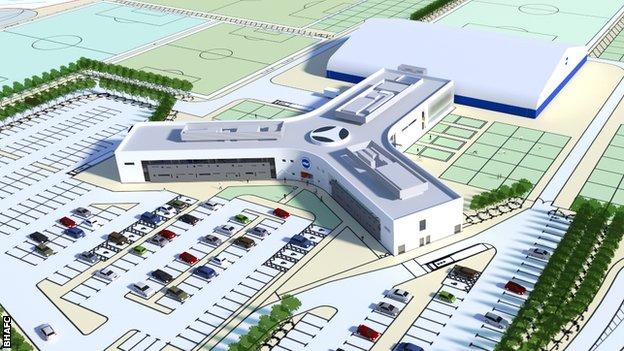 The Seagulls aim to add 8,000 seats to the capacity at the Amex and begin work on a new training complex this summer.

He told BBC Sussex: "Both applications are in. The one for the seats is now going through its consultation process.

"We're working with Adur [District Council] on the one for the training ground. That will shortly be registered and running."

The new seats are due to be installed for the start of next season, which will boost the capacity at the Amex Stadium to more than 30,000.

Meanwhile, the club hopes the training ground at New Monks Farm in West Sussex, which includes a youth academy, will be fully operational at the beginning of 2014.

Plans for the new complex were shown to residents in Lancing last month and received a "mixed reaction", according to Perry.

"A bit like the stadium, you are bound to get people who are fearful of what might be coming," he said.

"Then we got those people who came in and had a look, realised it was rather good and liked it.

"Then we got the fans who wanted to stay and talk about it.

"I hope we have quelled the fears of people who were worried."