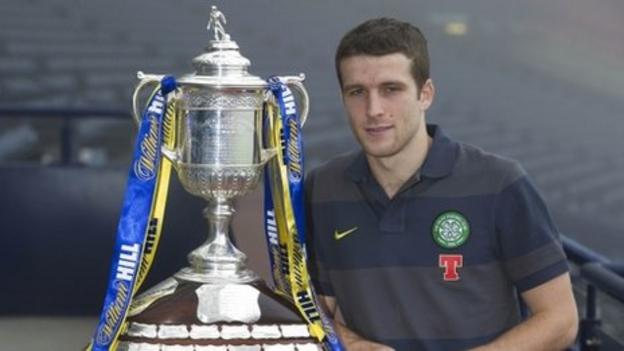 Celtic defender Adam Matthews believes a win for the Scottish Cup holders against Dundee United could give them momentum to reach the final.

United, who knocked out Rangers in the fifth round, host Celtic in the last eight at Tannadice next month.

"There are still some good teams and United is going to be a tough game," said Matthews.

"If we can get through that, then I think we've got a good chance."

Matthews, who helped Celtic beat Inverness CT to progress to the quarter finals, said there was pressure to win silverware irrespective of how their Old Firm rivals fared.

"It doesn't matter if Rangers are in or out. The pressure is still there," said the Welshman.

"It was there at the start of the cup and it's still there now. The players enjoy playing with that pressure and will be looking forward to the game.

"The result against Rangers will give United great confidence but we are on a great run just now and I'm sure we can keep it going."

Dundee United defender Robbie Neilson said the club would have preferred to face Celtic in Glasgow because of their inconsistent form at Tannadice this season.

"But we've beaten Rangers," he told BBC Scotland's Sportsound. "Obviously, if we're going to win the cup then we'll need to do it the hard way."

Stuart McCall's Motherwell side face either Queen of the South or Aberdeen in the quarter finals.

"If I am honest, my hope was to avoid Celtic and get a home draw," McCall said.

"Listen, in the quarter finals, any game is going to be difficult and watching the highlights of Queen of the South v Aberdeen, it looked a fairly even game. "

Aberdeen boss Craig Brown described the draw as "exciting" but stressed his side faced a difficult challenge at Palmerston.

Ayr Utd boss Brian Reid was reluctant to consider a potential meeting with Hibs for a place in the last four.

"It would be a bit disrespectful to look to Hibs at the moment because we have got a tough game against Falkirk, who are going really well and who are having a good season," he said.

Hibs, who are second bottom of the SPL, will be hoping to make it all the way to the final.

Manager Pat Fenlon said: "It gives us an opportunity to get into the semi finals which would be a massive lift for the club."

Motherwell v Queen of the South or Aberdeen

Ties to be played on the weekend of 10/11 March