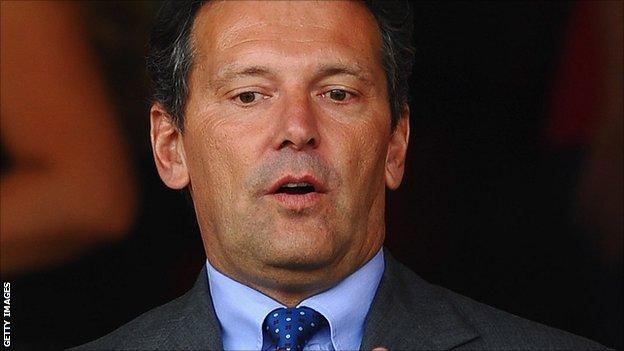 Nottingham Forest owner Nigel Doughty has been found dead in the gym at his home in Skillington, Lincolnshire.

In October, Doughty, 54, announced he would be stepping down as Forest chairman at the end of the season.

He bought the club in 1999 for £11m, saving them from administration, and took over as chairman from Eric Barnes three years later.

The life-long Forest fan is estimated to have invested more than £100m of his personal fortune into the club.

Tributes have been paid to Doughty by sporting figures, including England cricketer Stuart Broad who called him a "lovely man", as well as by Labour leader Ed Miliband and former Prime Minister Gordon Brown, to whose party Doughty was a major donor.

Brown mourned a "gentle giant" and said Doughty would be missed by people "who never knew him or met him but were beneficiaries of his commitment to good causes".

During his 10 years at the City Ground, Forest won promotion back to the Championship in 2008, three years after their relegation to League One, and under manager Billy Davies reached the play-offs in each of the last two seasons.

Despite their play-off finish, Doughty sacked Billy Davies as boss in the summer and appointed former England manager Steve McClaren in his place.

But McClaren resigned in October, reportedly frustrated at the financial constraints placed upon him.

Doughty stated his intention to step down as chairman on the same day, and said he took full responsibility for the failure of McClaren's tenure.

"It was a very poor decision on my behalf to appoint him," he told BBC Radio Nottingham, "I felt it was appropriate I take some responsibility.

"It has obviously not worked out. It has just been a bad decision in every way, shape and form - both for Steve McClaren and myself."

He estimated his yearly outlay to ensure Forest's survival at around £12m, but added that he intended to remain the club's owner.

Doughty, who was on Labour's board of assistant treasurers and last year led a taskforce on small business for a policy review, was described by party leader Miliband as "a kind and generous man".

He said: "I am shocked and saddened to hear of Nigel Doughty's death. I was with him only a week ago and he was full of life, enthusiasm and vigour.

"He was a kind, generous man with a deep desire to make the world a better place. My heart goes out to his wife Lucy and his children. We mourn his death deeply and will sorely miss him."

Former Prime Minister Brown added: "Nigel Doughty will be remembered as a gentle giant, a good, soft-spoken man with a deep commitment to public service who, from his great success in business, became one of our country's most generous benefactors.

"For all his life, he was loyal to all the causes that he had grown up with - his love for his team Nottingham Forest, the Labour Party and charitable causes that benefited from his generosity.

"He will be mourned by many who never knew him or met him but were beneficiaries of his commitment to good causes."

Midfielder Garath McCleary also paid tribute, saying: "Nigel Doughty has done so much for nottingham forest, which sometimes was not best appreciated. Thoughts go to his family. #rip"

England and Nottinghamshire cricketer and Forest fan Broad also paid his respects on Twitter. "Very sad Nigel Doughty has died. Lovely man and did a huge amount for Forest. RIP."