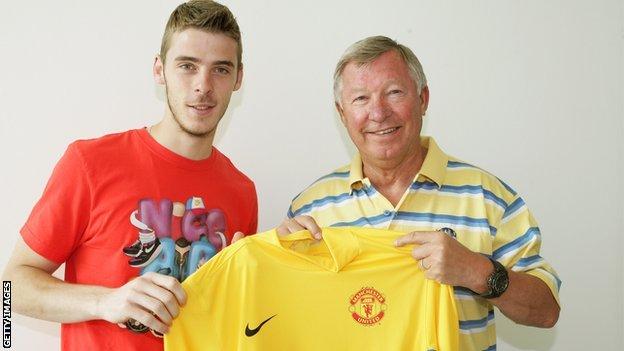 "When you make a mistake at United, it is highlighted and can be exaggerated a little bit," said Ferguson.

De Gea, signed from Atletico Madrid for £18.9m in June, is set to return to the team for his side's Premier League visit to Chelsea on Sunday.

The Spaniard missed Tuesday's 2-0 win over Stoke through illness.

And with team-mate Anders Lindegaard out with ankle ligament damage for at least four weeks, De Gea's return could be the start of an extended run in the side for the 21-year-old.

Despite criticism of De Gea for his role in both the goals conceded in the 2-1 FA Cup defeat by Liverpool in his last appearance, Ferguson believes his form will improve soon.

"They are mistakes and he wants to address it himself," Ferguson added.

"He will do so through maturity and the understanding of the English game."

United have not won away to Chelsea in the league since a 3-0 victory in 2002.

Fabian Barthez was in goal for the Red Devils that day and Ferguson admits he has struggled at times to find the right man to play between the posts.

"It is harder when you are replacing Edwin van der Sar and Peter Schmeichel. They are probably two of the greatest goalkeepers in European football over the last 40 years," he said.

"That is not easy. I found it difficult to replace them.

"That's why we went for a young replacement, who would develop and mature into the position because the potential is there."

Ferguson's Chelsea counterpart Andre Villas-Boas will be without defender John Terry, ruled out with a knee injury at the end of a week in which he was stripped of the England captaincy.

Left-back Ashley Cole will also be absent after receiving a red card in Tuesday's 1-1 draw with Swansea.

But Villas-Boas insists his side cannot feel sorry for themselves after a trying few days.

"First, we cannot be crying out," he said.

"Man United will miss players for sure, important players.

"We have important players out as well but we have a very big squad, which enables us to go on and try to win the game and approach it in a positive way.

"So that's what we'll try to do, whoever is involved."