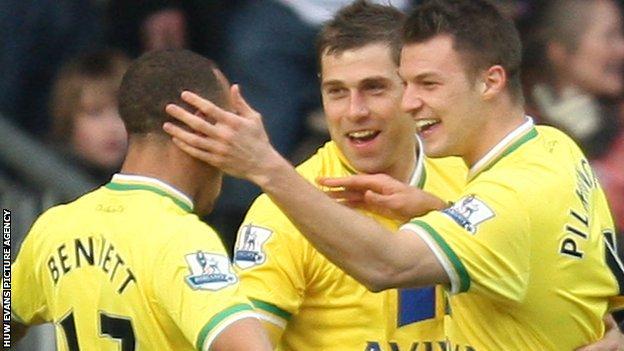 Norwich City hit back with three goals in 18 second-half minutes to consign Swansea City to only their second home Premier League defeat of the season.

Swansea took an early lead through Danny Graham's calm finish, and the striker was denied a second by a superb last-ditch Elliott Ward challenge.

Holt extended the lead before Graham clawed a goal back with a late penalty.

Graham wasted a great chance in injury time when he hooked a shot wide, and then goalkeeper John Ruddy came to Norwich's rescue to tip over Steven Caulker's bullet header in a breathless finish.

But the visitors, who collected a fourth win in six games to climb to eighth place, were deserving winners after dominating for large periods.

They looked able to tear the Swansea defence apart at will in the second half as they recovered from Graham's early opener to take complete control.

Their equaliser came in bizarre circumstances, though, as defender Ward benefited from Swansea's dithering to set up Holt.

The home defenders watched motionless as they expected the ball to loop out of play, but Ward showed his willingness to chase a lost cause for a second time and hooked the ball from the byline into the six yard box.

Holt reacted quickest to nod home just a minute and 40 seconds after the restart.

Four minutes later, the Canaries were ahead as Pilkington benefited from a significant slice of luck.

His low drive from the edge of the area looked to be heading wide, but the deflection off Neil Taylor's boot sent the ball in the opposite direction and past the wrong-footed Michel Vorm in the Swansea goal.

The remarkable turnaround continued as Norwich carved the home defence wide open to set up Holt for his second.

Elliott Bennett delivered the final pass to the unmarked Holt and the captain scored his 11th goal of the season by slotting past Vorm from the right half of the area.

Vorm was then at full stretch to push Kyle Naughton's thunderous effort onto the bar and the Dutchman, who had conceded just seven league goals at home before Norwich's visit, then kept out substitute Wes Hoolahan's effort.

Swansea were stunned and looked incapable of replicating any of the slick passing that had given them the lead.

Graham's opener showed all the hallmarks of their intricate style as Nathan Dyer delivered the killer ball that allowed the striker to take one touch before beating Ruddy.

Graham then appeared set to double Swansea's advantage before half-time but Ward's intervention nicked the ball off his toe as he waited for a tap-in at the far post.

But the home side's trusted passing principles deserted them in the second half, and the Liberty Stadium faithful had to wait until the dying stages for Swansea to finally exert some pressure.

A glimmer of hope arrived when Holt tugged Ashley Williams to concede a soft penalty and Graham stepped up to send Ruddy the wrong way for his 12th goal of the season.

But the striker was off target in injury time when he squandered a clear opening to rescue an unlikely point when he was left unmarked in front of goal.

There was still time for Caulker's header to force an instinctive save from Ruddy, but Norwich held on to claim a fourth successive win against a fellow promoted side this season.

"We have scored two at home and we don't expect to lose those games.

"It was a close game in the first half and we scored an outstanding goal through Danny Graham, but we went to sleep in the first period of the second half and Norwich are a team that score goals and they will punish you.

"But from the moment it went to 3-1 I felt we had the better of it and were unfortunate not to get something if you look at the chances we created, but we were not at our best."

"I thought we deserved the win, the passing was brilliant, and the enthusiasm and desire to press the game was excellent.

"Swansea scored against the run of play and maybe Andrew Surman should have made it 1-1 before half-time, but in the second half we were terrific.

"At half-time I said not to worry as we were well in the game, we gave as good as we got, the passing was excellent and the way we played the game was excellent."