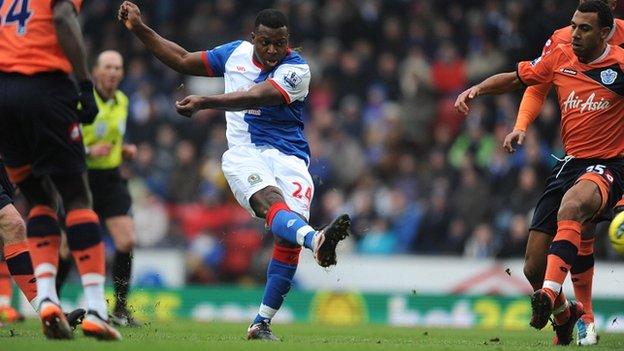 Yakubu scored on his return from a three-match suspension to help Blackburn secure a crucial victory over fellow strugglers Queens Park Rangers.

The striker collected a long free-kick and fired in from 18 yards before Steven Nzonzi swept home on 23 minutes.

And Junior Hoilett's angled shot was deflected in by Nedum Onuoha to complete a fine half for the hosts.

Substitute Jamie Mackie tucked in Taye Taiwo's cross and found the net late on but QPR had too much to recover.

Onuoha could have made amends for his own goal with a great chance before Mackie's double, but could not find a way past way Blackburn goalkeeper Paul Robinson.

Despite their late rally, Mark Hughes's side were made to pay for a poor first-half display, where they looked like a team still getting used to playing with one another.

And the defeat means QPR have won just once in five games since the Welshman took charge on 10 January.

Steve Kean's team were clinical in comparison with the win allowing them to move level on points with their opponents as they secured their fifth win of the season.

They will also be hugely thankful to have their leading marksman back in the side since his sending off against Fulham last month, and it was a perfect response to their 7-1 mauling by Arsenal last Saturday.

QPR only summoned up two efforts on target before the break via Armand Traore's shot and Adel Taarabt's chip.

Other than that, Bobby Zamora's overhead kick following a corner summed up a miserable half which began with a bang for Nigerian Yakubu.

As has been the case several times this season, it came via route one, with Robinson delivering the ball into the opposition penalty area and, when Nzonzi's flick landed at Yakubu's feet, he twisted past Anton Ferdinand before firing past Paddy Kenny for his 14th goal of the season.

Soon after, the hosts doubled their lead when Nzonzi collected the ball in midfield, fed Hoilett and, after receiving his return pass, struck sweetly from just inside the penalty box.

And their hopes of getting back into the contest before the interval were dealt a serious blow in first-half stoppage time.

Another long free-kick by Morten Gamst Pedersen was headed square by Scott Dann and, when Hoilett picked up the loose ball he somehow managed to squeeze it in from the angle as it clipped Onuoha and went in over Kenny's head.

The visitors started the second period more brightly, no doubt with a few half-time words ringing in their ears, but Yakubu almost made it 4-0 when he nonchalantly chipped on to the bar from the edge of the area.

That seemed to give Rangers much-needed urgency and Onuoha could have made amends for his earlier own goal but Robinson saved his effort.

Mackie then came on for Akos Buzsaky and gave QPR some reward for their improvement when he tucked in Taiwo's cross.

By this stage Blackburn were content to sit on their lead, although that gave their opponents more room to operate.

And a remarkable comeback looked possible when Taarabt found Mackie, who found the top corner in stoppage time.

But Rovers hung on and, without the likes of the suspended Gael Givet and the injured Chris Samba, they will be delighted to have their top scorer back in the fold once again.