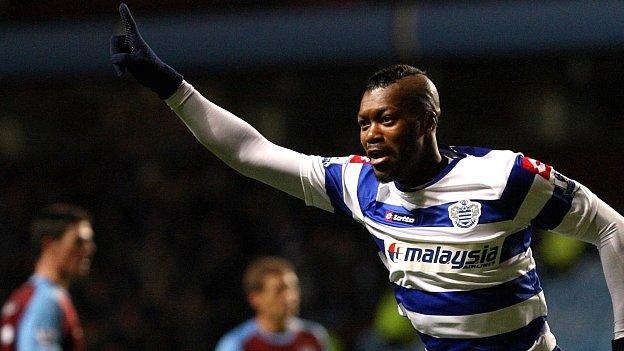 The pair, signed on transfer deadline day for a combined total of around £8m, could line up together for the first time against Wolves on Saturday.

"I'm really looking forward to seeing them play together. They've got great qualities that will complement each other," Hughes said.

QPR are three points above the drop zone, with 23 goals in 24 games.

Icelandic striker Heidar Helguson is their top scorer in the league with eight goals, but Hughes believes Zamora and Cisse bring something different to his squad.

Hughes worked with Zamora during his time in charge of Fulham last season, when the 31-year-old scored seven goals in 17 appearances.

Cisse, 30, opened his QPR account by scoring just 12 minutes into his debut against Aston Villa on Wednesday.

The Frenchman also scored on his first appearances for Liverpool and Sunderland in previous spells in the Premier League, and has also found the net at Auxerre, Marseilles, Panathinaikos and Lazio.

"If you look at his goalscoring record he has played just over 450 games and scored 220 goals, at top clubs, and not many strikers have that goals-to-game ratio.

"I think Bobby enjoyed his time under me at Fulham. When he came back in the second half of last season he was exceptional and was a big reason why we ended up eighth in the Premier League.

"If he can have a similar impact in the second half of this season that will augur well for us because we need to win games and score goals.

"We have invested heavily but what I wanted was complementary skills and different skill sets within the group of strikers I have available and we've got that now."

QPR signed Manchester United striker Federico Macheda on loan last month, but an attempt to bring in 20-year-old Brazilian Henrique was foiled by the Home Office's refusual to issue him with a work permit.