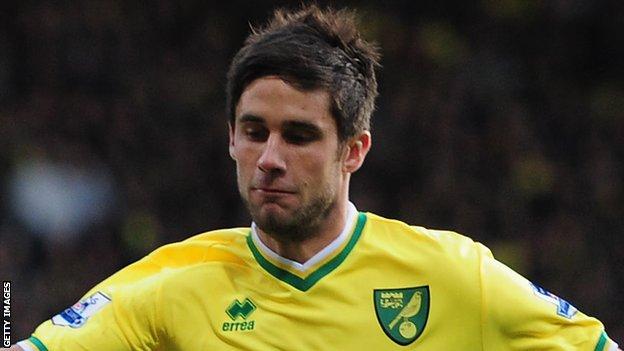 Norwich midfielder Andrew Surman has warned his side not to waste a positive start to the season by repeating their performance against Sunderland.

The Canaries dropped from ninth to 12th in the Premier League after Wednesday's decisive 3-0 defeat on Wearside.

"We've only got 29 points and we need perhaps another 10 to stay up," Surman told BBC Radio Norfolk.

"All of the good work we've done is going to count for nothing if we don't stay up at the end of the season."

Despite having the greater share of possession against Martin O'Neill's side, City carried little threat in the final third of the pitch.

It was a performance that belied Norwich's progress since winning promotion from the Championship in the summer, having suffered just seven previous defeats all season.

But former Wolves man Surman insists the disappointing showing at the Stadium of Light was not born out of complacency.

"We've never really underestimated the task that we've got. We never take where we are for granted," said the 25-year-old.

"We've got to try to put it behind us and look forward to Saturday and the rest of the season as well and try and make sure it doesn't happen again.

"There's still 15 games of the season left. Sometimes games like this happen. It's very disappointing but you've got to move on.

"The way we have played this season we've set a standard and we didn't really get anywhere near that."