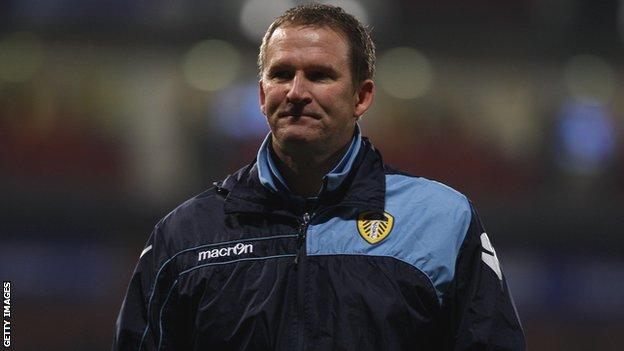 The former Leeds trainee's final match as United boss saw the club slump to a 4-1 defeat at home to promotion rivals Birmingham City.

Former Sheffield United and Queens Park Rangers boss Neil Warnock has been linked with the post.

Tuesday's defeat by Birmingham leaves Leeds in 10th place in the Championship, three points off the play-offs.

Chairman Ken Bates said he had no choice but to dismiss the 42-year-old and has hit back at critics who claim he did not offer Grayson financial support.

"We have to acknowledge the previous three seasons Simon got us to the League One play-offs then promotion and then we finished seventh [in the Championship] and we have backed him all the way," Bates told Yorkshire Radio.

"We spent over £12m on wages so why are people blaming me for the recent results?

"All the money we have received has gone back into the squad. The manager decides who he wants to buy, we as the board just pay for it. I only said no once."

Grayson left Blackpool to take over at Elland Road in December 2008 following the sacking of Gary McAllister.

He led the club to promotion from League One in his first full season in charge before finishing in seventh place in the second tier last season.

Chief executive Shaun Harvey told the club website: "We have 18 games to go this season and are still within touching distance of the play-offs.

"We felt with the transfer window closed we needed to make the change at this time in the belief that a new managerial team will be able to get more out of the existing squad of players and make the difference."

Former Leeds defender and Radio 5 live pundit Danny Mills believes the availability of Warnock, who was sacked by QPR in January, may have influenced chairman Ken Bates's decision to relieve Grayson of his duties.

He said: "I think so for definite [Warnock's availability influencing the decision]. He got sacked for QPR because he is basically known as a Championship manager who will get you up. That's what he has done time and time again.

Mills also believes results will have played a crucial part in Grayson's sacking, but reckons that the Championship club will struggle to compete with the bigger sides in the division because of their financial situation.

"It has come as little bit of a surprise, but just before Christmas Ken Bates came out and said that if Grayson does not turn results around and get Leeds up towards promotion then his job would be under review.

"Leeds are a big club in terms of tradition but in monetary terms they are not. They have been out of the Premier League for a long time [since 2004]. They do not have the parachute payments that other clubs have.

"Leeds cannot compete at that end, 30,000 people in a week does not help you with that."

After leaving Leeds in 1992, Grayson went on to play for Leicester City, Aston Villa, Blackburn Rovers and Blackpool.

He took over as manager at Bloomfield Road in 2005, succeeding Colin Hendry.