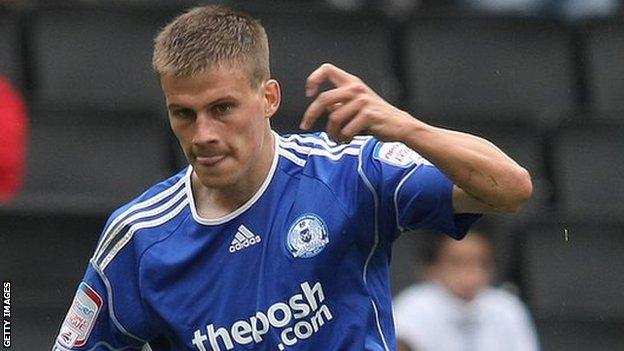 Norwich City signing Ryan Bennett has revealed he was heading to Swansea for contract talks before making a dramatic deadline-day switch to the Canaries.

The Welsh club had not agreed a fee with Peterborough United when Norwich made a last gasp swoop.

"Swansea were interested and I had to make my way down there because of the deadline," he told the Posh website.

"I got near Windsor then got the phone call to turn around. That's football and it's something I had to deal with."

The fee, which is undisclosed, surpasses the £2.5m paid by Brighton for Craig Mackail-Smith in the summer.

The England Under-21 international defender will go back to London Road on loan until the end of February while Posh boss Darren Ferguson looks for a replacement.

"I don't think it's sunk in yet really," he added. "It feels like I'm still a Peterborough player and I'll continue to play as I have been and try not to think about the move I've got now.

"It's up to me to go out there and play well for the next month because a lot of people are going to be looking at me thinking 'is his head there?' It's up to me to prove that it is.

"Peterborough is a club I've really come to love. But it's a move I couldn't turn down. I'm sad to go but it's something I had to do."