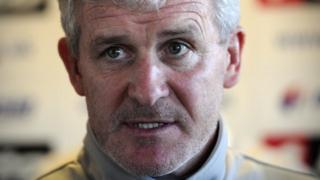 QPR boss Mark Hughes insists he will not attempt to "influence" Anton Ferdinand's decision to shake Chelsea skipper John Terry's hand before Saturday's FA Cup clash, saying it is a "personal matter" between the players.

The fourth round tie is the first meeting for the teams since Terry was charged with racially abusing Ferdinand in October's derby, but Hughes urges QPR to focus on the match.

Moyes keen to take West Ham to next level