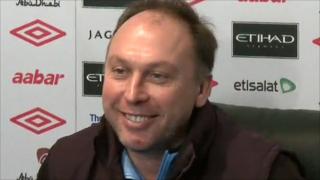 Manchester City coach David Platt is unhappy at the "inconsistency" in refereeing after the Football Association's decision to charge Mario Balotelli with violent conduct, and suggests City will not contest the decision as past appeals have proved "futile".

Balotelli appeared to stamp on Scott Parker before scoring a late penalty to secure City's 3-2 Premier League win over Tottenham on Sunday. He now faces a four-match ban, and has until 1800 GMT on Wednesday to respond to the charge.