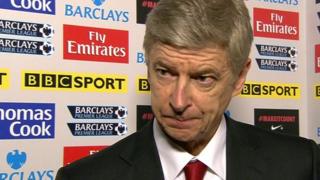 Arsenal manager Arsene Wenger is disappointed with the way his side played during the first 45 minutes against Manchester United, but was happier with their efforts in the second half despite falling to a 2-1 defeat at the Emirates.

Arsenal manager Arsene Wenger concedes that a tactical change he made in the second half, bringing off Alex Oxlade-Chamberlain off and replacing him with Andrey Arshavin, did not work.

The reasons why football is set for major change

Sports Personality of the Year: Third contender announced from 14:10 GMT