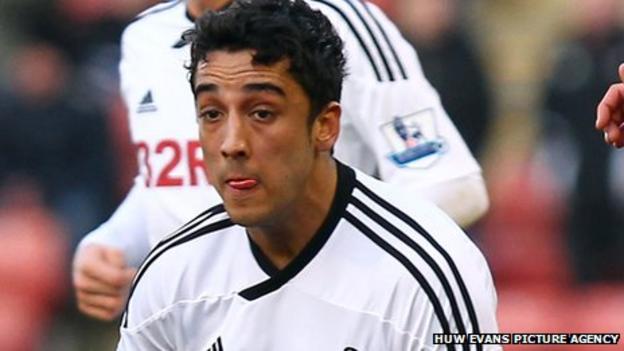 Swansea came from behind to beat the Championship side 4-2 at Oakwell.

Taylor admits the Swans could have been on the wrong side of an upset if their attitude had not been right.

"I think our professionalism was brilliant and right from the off we started as if we were playing in a Premier League game," he said.

Goals from Angel Rangel, Nathan Dyer and a brace from Danny Graham saw the Swans advance to the fourth round where they will face either Macclesfield or Bolton away.

Manager Brendan Rodgers had made only two changes to the side which had won at Aston Villa in their previous game.

"The side we put out showed we knew it was going to be a difficult game against a team who, credit to them, try and play football in the Championship like we did last year," said Taylor

"We came here to get the result and show there were no upsets going to happen.

"You don't want a replay. If you can avoid having an extra game then obviously you want to do that. We've done that. In the end hopefully our class told.

"If you look back at when we played these [Barnsley] a year ago and we drew 1-1, it was probably a good result.

"If you see how far we've come since then I think it shows the strides that the club's made."

With a place in the fourth round secured, Brendan Rodgers' side return to Premier League action next Sunday when they play host to Arsenal.

Swansea are unbeaten in their last three league games and Taylor says the side will go into the game confident they can extend the run.

"It will be another tough game for us but we're inviting them to our place," said Taylor.

"I think we gave a really good account of ourselves at the Emirates and probably should have got something on the day. It was a freak goal that got them their goal.

Taylor has been linked with Arsenal during recent weeks but the former Wrexham defender has dismissed the speculation.

The 22-year-old, who rejected a move to Newcastle United during the summer, says he is happy at the Liberty Stadium.

"I've had a few texts off people telling me but I just get on with my football," said Taylor. "I'm enjoying my football here and I think it's going great.

"Every player should be getting watched at the moment because we're a young outfit and we're doing really well.

"We play some exciting stuff and I think a lot of people are talking about us which we want to just keep doing.

"We're a hard working bunch and as long as we stay together and keep going, we'll be successful as a team."