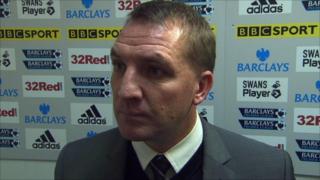 Swansea City manager Brendan Rodgers describes 2011 as an "iconic" year for the club and is happy that the team finished with an "outstanding" performance in the 1-1 draw against Tottenham.

Rodgers believes his team had the better of the first half and took "total control" after the break, adding that a draw was the least his players deserved.

FA Cup: Southampton 1-0 Shrewsbury - League One side trail early on