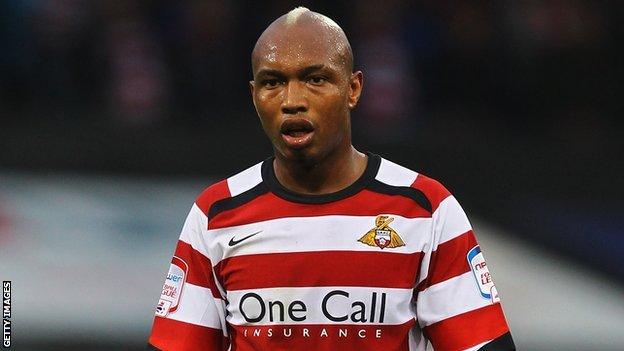 The 31-year-old, who was released by Blackburn in the summer, originally joined Rovers on a three-month deal at the end of October.

Diouf has now signed a deal until the end of the season, with the option of staying for another 12 months.

"The way everybody has taken to him here, I think he's happy. He's probably got enough money, and just wants to be somewhere he's valued. He's signed a modest contract, a lot less than some of the players who are already here."

Diouf said: "We're starting to build something here, we have ambition, and also this is good for my family.

"The football club believes in me, and I love their ambition and the challenge. We can definitely get to the Premier League. Where Doncaster is now, Stoke City were some years ago."

The two-time African Footballer of the Year previously played for Liverpool, Bolton, Sunderland and Rangers.

Diouf, who has courted controversy throughout his career in England, joined Liverpool from Lens for £10m in 2002.

He moved to Bolton in 2005, making 88 appearances at the Reebok Stadium, before switching to Sunderland in 2008.

Diouf then joined Blackburn under Sam Allardyce's management in 2009 before finishing last season on loan at Rangers.

Doncaster chairman John Ryan expressed his satisfaction at keeping Diouf, saying: "We are pleased about him signing. He's a quality player."