BBC Sport takes a closer look at the 16 teams who will contest the 2012 European Championship in Poland and Ukraine. Spain are the defending champions. Can Croatia take their crown? 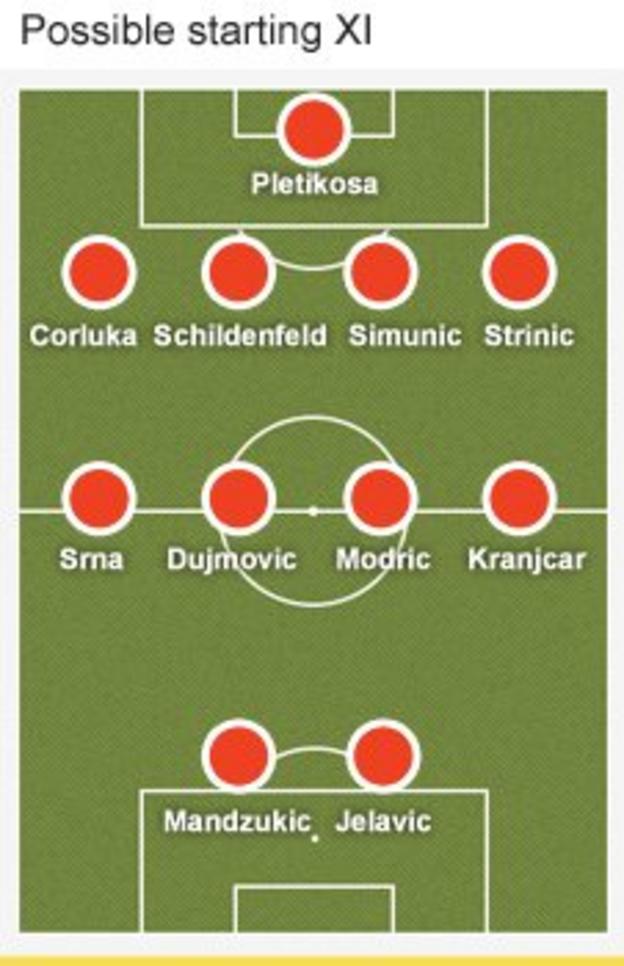 Croatia have struggled to replace brothers Robert and Niko Kovac, who were key players and the spirit of the team. They have problems at the back, too, because Jo Simunic is not playing regularly and is out of form. This means a lot of the responsibility will fall on star midfielder Luka Modric. He is an outstanding talent but like at Tottenham, he doesn't score too many goals. He will dictate Croatia's tempo yet the question remains whether his team-mates can finish off his creativity.

Easily one of the best midfielders in the Premier League, Luka Modric might also be described as one of the best players in the world. Tottenham dug their heels in to stop Modric from moving to Chelsea last summer, and have been rewarded as he continues to lead them on an upward curve with a heady blend of creation and vision.

Spurs clinched his signature shortly before Euro 2008, where Modric's majestic midfield displays saw him chosen in Uefa's team of the tournament. He converted a penalty in Croatia's opening win against Austria, but dragged his spot-kick wide in the shoot-out loss to Turkey. The 26-year-old will be desperate to make amends this summer.

Croatia's captain Darijo Srna has been a regular on the right flank for almost a decade, and is probably their second-best player behind Modric. Mainly used by Shakhtar Donetsk as an attacking right-back, he was deployed on the right wing by Slaven Bilic during the latter stages of Croatia's Euro 2012 qualifying campaign.

Srna has an excellent goalscoring record, and was on the scoresheet at both the 2006 World Cup and Euro 2008.

He was briefly dropped by Bilic after visiting a nightclub before a qualifier in 2006, but three years later was handed the captain's armband following Niko Kovac's retirement.

RECORD AGAINST REPUBLIC OF IRELAND

Not great. In six matches between the two nations, Croatia have won just one - a 1-0 win in Zagreb in September 1999.

Second to Greece in their group, Croatia qualified for the play-offs and swiftly made light of a 50,000 crowd in Istanbul as they landed in Turkey for the first leg. Just two minutes into the match the visitors scored, a quick free-kick catching the Turkish defence by surprise as Ivica Olic flicked the ball past Volkan Demirel after Vedran Corluka crossed well from the byline.

Coursing with confidence, Croatia stretched Turkey at every opportunity, duly adding a second 32 minutes in as Mario Mandzukic headed home from Darijo Srna's delivery. Soon after the break Srna whipped over another dangerous cross. Corluka nodded in. A fourth European Championship in five attempts was in touching distance - and they finished the job with little alarm as the second leg finished goalless.

A guitar-playing law graduate who is fluent in German, Italian, and English... Slaven Bilic is not your average football manager.

A relative novice when he took over in 2006, Bilic has established the Croats as a fixture near the top of the Fifa rankings - not since 2006 have they ended the year outside the top 10.

Although he calls the Croatia job a "duty" and "love", he admitted in April that any manager "would jump at the opportunity" to work in England.

Poorly paid, at least by Premier League standards, he has long been linked with a move to club management, and will step down when his contract expires this summer to take charge of Russian club Lokomotiv Moscow.

Only two coaches at Euro 2012 have held their posts for longer than him - Denmark's Morten Olsen and Germany's Joachim Loew.

Croatia collected 23 yellow cards in qualifying - only Greece (27) had a worse record.

Excellent. For a nation that only gained independence in 1991, Croatia needed little time to settle at major tournaments. At their first, Euro '96 in England, they made the quarter-finals, losing 2-1 to Germany at Old Trafford as Davor Suker got on the scoresheet.

At their second major tournament - the 1998 World Cup in France - they nearly went all the way to the final, being narrowly knocked out by hosts France in a controversial match in the last four before beating the Netherlands 2-1 in the third-place play-off.

High jumper Blanka Vlasic will be hoping to go one better than the silver she achieved in Beijing. If she does expect the media obsession with the elegant 28-year-old to spread from her homeland.

Goran Ivanisevic is a cult hero with English tennis fans, the only person to win the men's singles title at Wimbledon as a wildcard.

Though Hollywood film star John Malkovich was born in Illinois, in the United States, his paternal grandparents were proud Croats.