BBC Sport takes a closer look at the 16 teams who will contest the 2012 European Championship in Poland and Ukraine. Spain are the defending champions. Can England steal their crown? 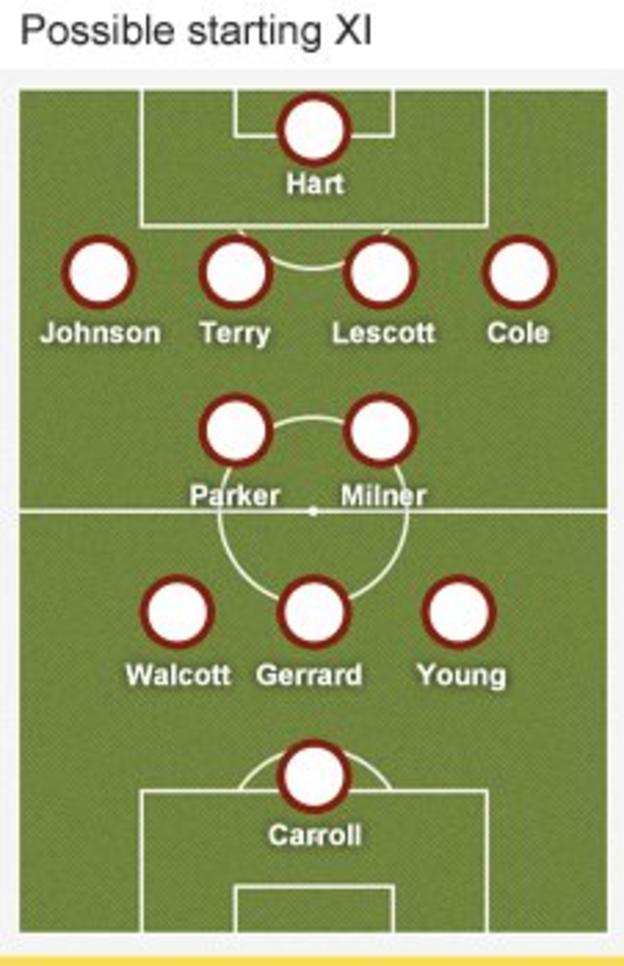 There is little time for new boss Roy Hodgson to experiment, so he is likely to stick with many of the players who gained qualification. The former West Brom, Liverpool and Fulham manager is renowned for playing a 4-4-2 formation, but without Wayne Rooney he is likely to try Steven Gerrard behind Andy Carroll to start with.

Our fans were brilliant today. Thx for ur support all season. We have to look ahead to next season.

Defensive organisation has been a lynchpin of Hodgson's success, but he has loaded the squad with attacking midfielders to add an attacking threat. Don't expect fireworks without Rooney, but England have shown in recent games that a counter-attacking approach suits them.

After more than a decade as one of the world's best midfielders, can Liverpool's Steven Gerrard haul England's underachievers to the heights which were expected of them at the 2010 World Cup in South Africa?

One of the so-called 'Golden Generation' upon whom the lights are starting to fade, at least at international level, much will rest on inspirational Gerrard initially - if fully fit - in the absence of his fellow Liverpudlian Wayne Rooney, who is banned for the first two group games.

Manchester United striker Danny Welbeck is being tipped by many pundits to break into the England team following a promising season at Old Trafford, which has seen him keep Dimitar Berbatov out of the side. The 21-year-old has made five England appearances to date - scoring the winner against Belgium - and scored five goals in 14 games for the Under-21s.

Manchester United's Wayne Rooney swatted aside a frenzy of allegations over his private life to spark England to a convincing 3-1 victory in Switzerland as Fabio Capello's team made it a maximum six points from their first two Euro 2012 qualifiers, paving the way for their relatively smooth progress as eventual group G winners.

Rooney's goal was his first for England in a year and Manchester City's Adam Johnson showed the options available on the bench, excelling as a substitute after Theo Walcott was stretchered off by adding a superbly-taken second goal in the 69th minute in Basle.

Roy Hodgson was appointed as Capello's successor on 1 May following several weeks of speculation suggesting Tottenham manager Harry Redknapp was a shoe-in for the job.

Hodgson's previous international experience with Switzerland at World Cup '94 was an important factor for the Football Association.

Hodgson, 64, named his 23-man squad on 16 May, leaving out Manchester United defender Rio Ferdinand and has opted for Gerrard as his captain. Hodgson will be looking to make an immediate impact and only has friendlies against Norway and Belgium as preparation for the tournament.

The 1966 World Cup winners came third two years later in Italy, beaten 1-0 in the semi-finals by Yugoslavia - England's best-ever Euro showing. They qualified just once for the tournament between then and 1988, and miserably failed to qualify last time around in 2008. Euro 96 - when 'Football Came Home' - saw Terry Venables' side reach the semi-finals, only to be knocked out by Germany.

The year is ingrained in most English brains: 1966. Bobby Moore lifted the World Cup. It's still the benchmark, and still the video reel plays out heady memories of Nobby Stiles jigging over the Wembley turf.

Prince William's marriage to Kate Middleton, now the Duchess of Cambridge, put English royalty back into the limelight. Visitors flock to London from around the world to peer at the Windsor family haunts.

Heptathlete Jessica Ennis has emerged as the poster girl of Team GB, in demand from sponsors and media seeking a British gold medal winner in the athletics stadium. The Sheffield multi-eventer fell just short in the defence of her world title in Daegu in 2011. The pressure is on to put that right on home soil.

Forget traditional industries. Music is what England generally does best. Pioneering pop and rock mega-groups The Beatles and The Rolling Stones both hail from its shores, while 1980s bands like The Smiths are still listened to around the globe. And mainstream X Factor-style hits fly off the writing and performance conveyor belt.