BBC Sport takes a closer look at the 16 teams who will contest the 2012 European Championship in Poland and Ukraine. Spain are the defending champions. How will the Czech Republic fare? 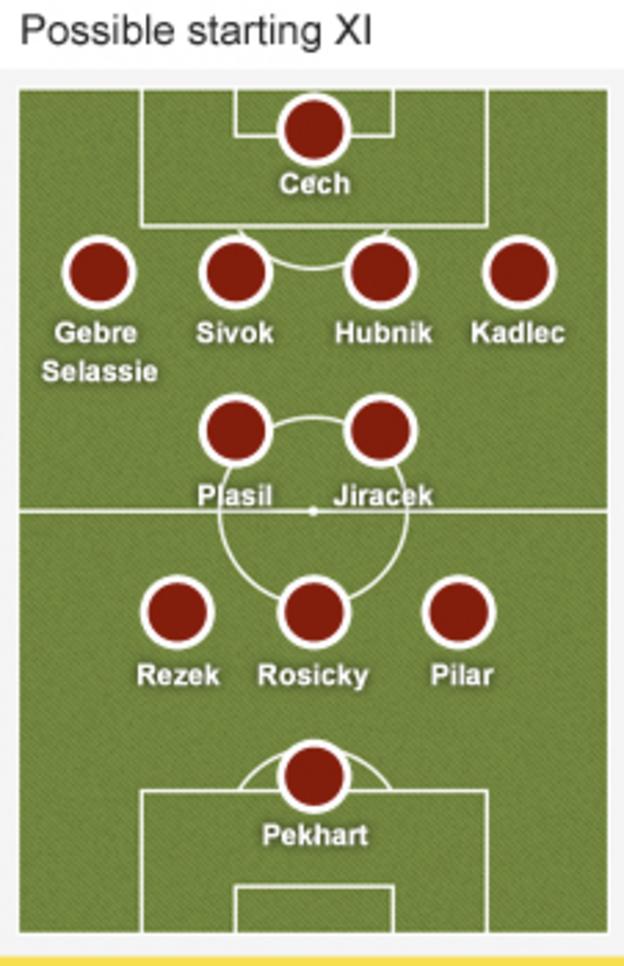 A lack of width at the start of the qualifying campaign encouraged coach Michal Bilek to switch his formation, with Tomas Rosicky now playing centrally behind a lone striker Tomas Pekhart or Milan Baros. The performances of deep-lying midfielder Jaroslav Plasil have been key to their progress, giving the Czechs more creativity, while wide forwards Jan Rezek and Vaclav Pilar are supported by offensive-thinking full-backs Theodor Gebre Selassie and Michal Kadlec. A largely organised side that likes to break on the counter-attack, captain Petr Cech says their strength is their adaptability.

Household names in the Czech squad are few and far between, but Chelsea goalkeeper Petr Cech needs no introduction. The 29-year-old kept clean sheets in both play-off matches against Montenegro, making several important saves in the second-leg victory in Podgorica.

Cech, who is set to take part in his fourth major international tournament, will be keen to erase memories of his costly error against Turkey at Euro 2008. The Czechs were heading for the quarter-finals until Cech fumbled a routine cross in the 87th minute, allowing Nihat Kahveci to equalise. Moments later Cech was again beaten by Nihat, sending the Czechs out.

Bayer Leverkusen left-back Michal Kadlec was top scorer in qualifying with four goals, although three of them came from penalties.

He held his nerve to convert the crucial late spot-kick against Scotland, which was controversially awarded after team-mate Jan Rezek appeared to dive.

Kadlec made an inauspicious start to his international career, scoring an own goal on debut in a Euro 2008 qualifier against neighbours Slovakia, but has nonetheless established himself as a regular starter.

Brief. England have only met the Czech Republic twice, both in friendly matches at Wembley. A late Joe Cole goal earned the Three Lions a 2-2 draw in August 2008, while Darren Anderton and Paul Merson netted in a 2-0 win in 1998.

England have faced Czechoslovakia twice at major international tournaments, winning 1-0 at the 1970 World Cup and 2-0 in 1982.

RECORD AGAINST REPUBLIC OF IRELAND

Good. The Czech Republic have the edge, winning four of eight encounters with the Irish, losing twice. The last meeting was a friendly in Dublin in February in which Milan Baros' opener for the visitors was cancelled out by Simon Cox's 86th-minute strike.

The Czech Republic booked their place at Euro 2012 thanks to victories against Montenegro and Scotland, but will have to beat far more accomplished opposition if they are to make an impact this summer. So while their trip to Granada to face Spain ultimately ended in a 2-1 defeat, they will take heart from their performance against the world and European champions.

A well-taken goal from Jaroslav Plasil put the visitors in front, a lead they held until the 69th minute, when David Villa netted the first of two goals, the second of which came from the penalty spot.

A midfielder who played and scored for Czechoslovakia at Italia '90, Michal Bilek took over as coach following the failure to qualify for the 2010 World Cup, with former Liverpool midfielder Vladimir Smicer joining him as team manager.

It has not been a smooth ride for the duo. Expectations from fans are high, but the likes of Pavel Nedved, Patrik Berger and Karel Poborsky are long gone, and their replacements are not as talented.

A survey revealed that 96% of fans wanted to see Bilek sacked, but he has retained the support of his players. The team celebrated qualification in Montenegro by singing derogatory songs aimed at their critics. The players' raucous behaviour in Podgorica airport saw them fined by the Czech FA, but it appears Bilek has successfully fostered a "them against us" mentality within the squad.

The Czech Republic have qualified for five successive European Championships since the split with Slovakia. They beat Italy, Portugal and France on the way to the Euro '96 final, before losing to a golden goal from Germany's Oliver Bierhoff.

The only other time they made it beyond the group stage was in 2004, when wins over Germany, the Netherlands and Denmark took them to the semi-finals, where they lost to Greece.

Czechoslovakia were World Cup finalists in 1934 and 1962, and quarter-finalists as recently as 1990. Since the "Velvet Divorce" with Slovakia, the Czech Republic have only reached one World Cup (in 2006).

World record holder Barbara Spotakova will defend the javelin title she won in Beijing, continuing the legacy of compatriot Jan Zelezny in the event. Spotakova has been one of Zelezny's pupils since the male world record retired in 2006.

Victor Lustig - a con artist who earned infamy in the first half of the 20th century as "the man who sold the Eiffel Tower". The "bouncing Czech" eventually ended up in the USA, where he even managed to fool Chicago gangster Al Capone.

Often ridiculed before the fall of the Iron Curtain, Skoda have gone from strength to strength since being taken under the wing of German automobile behemoth Volkswagen. Based near Prague, the company sold over 750,000 cars last year.