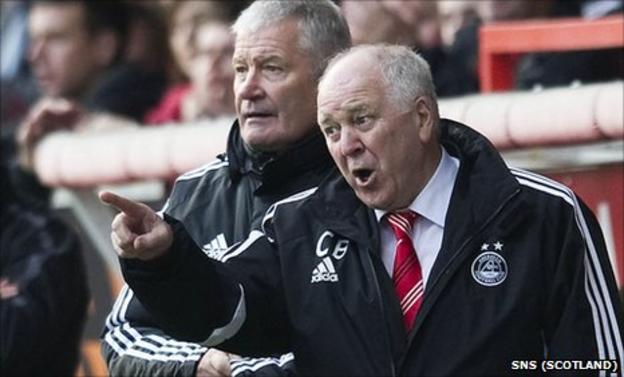 Goals from Kari Arnason, Youl Mawene and Andrew Considine gave the Dons back-to-back wins for the first time this season.

"The confidence is returning but we were always a confident enough team," Brown said.

"We didn't get any breaks at all in the first half-dozen games in the league and now we are getting a break or two.

"I think you can see we will be a difficult team to beat as well so I'm optimistic about the remainder of the season."

Brown's side had received plenty of criticism after failing to score in seven of their opening nine SPL matches but this win coupled with their 4-0 thrashing of Dunfermline means they have now hit the back of the net seven times in two games.

"It possibly wasn't as resounding as the last home game against Dunfermline but I think it was a very competent performance against Dundee United who are one of the better sides in the SPL in my opinion," Brown added.

"To be three up after an hour was very good going and I think we deserved to be because we played well. We are obviously still trying to improve but the last two results have vindicated my contention that we are a better team than the results we have achieved and the league position indicated. We are not as bad as people were making us out to be."

The win sees Aberdeen leapfrog United to move up to seventh place, ahead of an Old Firm double-header.