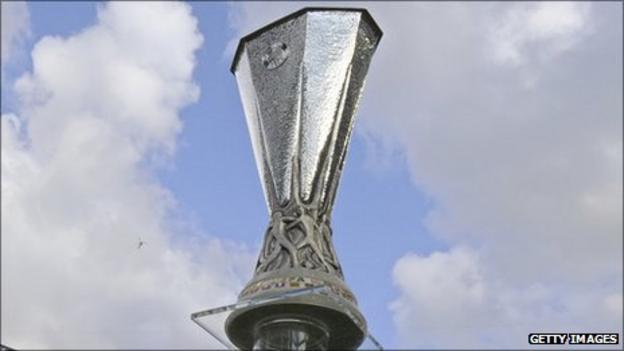 Tottenham have been drawn against Russia's Rubin Kazan, Paok FC from Greece and Irish team Shamrock Rovers for the Europa League group stages.

Birmingham, who were relegated from the Premier League last season, will take on last season's runners-up Braga SK, along with Club Brugge and NK Maribor.

There were no Scottish teams in Friday's draw after Rangers, Celtic and Hearts all lost their play-off ties.

Tottenham director of football administration Darren Eales admitted the six-hour journey to Kazan, a city on the River Volga and a 90-minute flight east of Moscow, would pose challenges.

Eales, however, welcomed the prospect of playing Rovers. He said: "I must admit after we had Rubin Kazan first out of the hat and then PAOK from Greece, I thought I might struggle to go back to White Hart Lane with that draw - but at least we got Shamrock.

"It should be a great night in Dublin. Their stadium only holds 6,000 so I think they will need to find somewhere with a few more seats than that and it should be a cracking atmosphere there, and a great little trip for our fans."

Asked whether Tottenham would have to prioritise domestic competitions, Eales insisted not: "We are not going to treat this as a second-class competition but clearly we are going to have to manage our squad to make sure we get the best out of it for all competitions. That's part of the challenge of being in Europe."

Rovers chairman Jonathan Roche said the Spurs fixture was a dream come true for the fans.

He said: "It's a great draw for our fans. Last night was an historic occasion for us and to top it off like this, it hasn't quite soaked in.

"It's been an unbelievable two days. Five years ago we were relegated, then the fans took over the club and we won the league for the first time in 16 years last season.

"Hopefully now this shows people that we play a good style of football. It's not really about the money but it's the whole razzmatazz and the whole profile on the football club. Hopefully we can do ourselves justice."