Brendan Rodgers insists Swansea City "want to do well" in the League Cup but the Swans boss admits a soft spot for second round rivals Shrewsbury Town.

Rodgers' wife Susan is a Shrewsbury fan as her father is Shrews striking great Mike Kearney who later worked with the current Swansea boss whilst at Reading.

"I have actually followed Shrewsbury over a number of years because of the connection," said Rodgers.

"My wife was born in Shrewsbury...but everyone will want a Swansea win."

The Swans manager insists there will be no split loyalties as the Welsh club look to improve on their League Cup best and go further than the fourth round - a record they equalled last season.

Rodgers will not sacrifice cup success for Premier League survival as the top-flight newcomers want to push on all fronts. 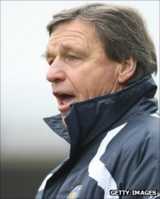 The hosts have not been past the League Cup's second round since 1993 but Swansea have not won in Shrewsbury for 14 years.

And Rodgers maintains he has prepared as diligently for their visit to Graham Turner's League Two side as the Swansea manager will do for Sunderland's Premier League trip to the Liberty Stadium on Saturday.

"They have a very experienced manager who has been around the game for many years," said Rodgers.

"He knows the club inside out and played 300 games for them as a player. My wife's father played for Shrewsbury for years - and him and Graham Turner played together.

"So it is a club I have seen develop. We don't underestimate them."

"They have players like Mark Wright, who is a threat, Lionel Ainsworth, who was at Watford when I was there, and Marvin Morgan.

"We spoke about our objectives in pre-season and the cups are something we want to do well in - and we feel we can.

"We want to progress whether it is in the Premier League, FA Cup or Carling Cup."

Rodgers is expected to rotate his team and hand Portuguese goalkeeper Jose Moreira his debut and striker Leroy Lita his first start.

Youngsters Joe Walsh and Daniel Alfei, meanwhile, are set to be given a chance in the full-back positions.

"But it certainly won't weaken us a team," insisted Rodgers. "I feel I have a group of players that any team I make up, it will be strong."