As a player, he was a member of the side which faced Spanish giants Atletico Madrid in the Cup Winners' Cup in 1985.

Now as Citizens manager, he is overseeing a successful period in the club's history and has already led the club into Europe three times.

And on Wednesday against HJK Helsinki, Powell will become the first manager in Bangor's history to select a team for a Champions League tie.

It will be a difficult task as HJK Helsinki are currently top of the Finnish league, boasting former Liverpool and Ajax star Jari Litmanen in their squad.

"I'm a very privileged manager," said Powell, who played 86 Football League games for Tranmere Rovers. "It's probably the highlight of my career.

"I was lucky enough to play for the club in the '80s in Europe. For me to manage in the Champions League, I'm a very proud manager."

Despite losing the Welsh Cup Final in 1985 to Shrewsbury Town, Bangor City represented Wales in the European Cup Winners' Cup the following season.

Powell recalls a trip to Norway in the first round.

"We managed to get an away goal in Fredrikstad and we came back to Farrar Road and I remember it was a hard 90 minutes," he said.

"They were on top, but they never scored."

Having beaten the Norwegians thanks to Everton Williams' away goal, Bangor had a dream tie against Atletico Madrid in the second round.

"It was like playing the Manchester Uniteds and the Chelseas of this world now. We didn't disgrace ourselves," said Powell.

"We lost two early goals at Farrar Road in the first five minutes and people thought it was going to be seven or eight.

"But, after the break we were the better side, we had the better chances. We went over to Madrid and we only lost 1-0.

"This is what I instill in my players. Football is a funny game and anything can happen on the day."

Powell was at Bangor for the inaugural season of the League of Wales in 1992 before joining Connah's Quay Nomads.

Soon after he was appointed manager of Nomads and led them to the 1998 Welsh Cup Final, only to lose on penalties to Bangor of all clubs.

Powell remained loyal to the Deeside side until 2007, when the lure of managing Bangor was too great and where he has built a side now regularly gathering Welsh footballing honours. 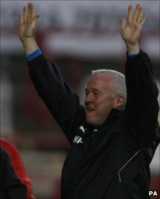 Whatever the score, we are going to enjoy the night. Hopefully we can do Wales proud

"Winning three Welsh Cups and then winning the league says a lot about the type of players we've got at the club," said the 47-year-old Welshamn.

"I can't praise the players highly enough. We keep setting them goals and they keep exceeding them.

"It was a pleasure to manage a team that won the league through the merits on the pitch.

"We haven't finished yet. We're going to go into this season and we want to build and carry on."

Despite winning the League of Wales title in 1994 and 1995, Bangor were then denied the opportunity to play in the Champions League and had to settle for a Uefa Cup berth.

But on Wednesday at Rhyl's Belle Vue, Bangor will make a belated first appearance in European football's flagship competition.

And Powell believes his side are fully deserving of their place as champions of Wales.

"It's Champions League football, something the club's never had," added Powell.

"The players deserve a crack at it because of their achievements last season. We know it's not going to be easy.

"We're just going to go out there and give it our best shot.

"We're not going to sit back and try and defend - we're going to play our normal game.

"Hopefully the crowd at Rhyl can get behind us and make sure we keep the tie alive for when we go to Finland."

Manager Powell is confident, even though he knows their opponents have won the Finnish title 23 times and have been champions for the last two seasons.

However Bangor have experience of defeating Finnish teams in Europe - they beat FC Honka 3-2 over two legs in last season's Europa League.

Bangor's success over Honka was the first time they had progressed in Europe since the exploits of 1985.

"Nobody gave a prayer last season when we played Honka," said Powell. "They were saying the tie was over before we went out there.

"The set of players and the spirit we've got within the squad, we proved a lot of people wrong.

"We've got to believe that we can get a result against them. I'm sure we'll give them a game.

"Whatever the score, we are going to enjoy the night. Hopefully we can do Wales proud."