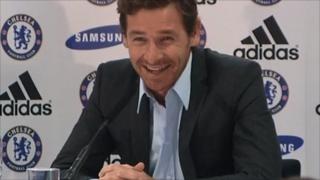 In his first press conference as Chelsea manager, Andre Villas-Boas plays down comparisons with his former boss and ex-Blues manager, the self-titled 'Special One', Jose Mourinho.

The former Porto boss tells BBC Sport's Andy Swiss he believes in a strong team ethic and says the backroom staff he has accrued will help the team succeed.

Villas-Boas also stresses he is under no pressure to win the Champions League in his maiden season.