The Championship club confirmed that they are now in talks with McClaren, who Aston Villa have overlooked as they search for a new manager.

Former Preston and Derby boss Davies was unable to secure promotion to the Premier League after two attempts, losing in last season's play-off semi-final 3-1 on aggregate to Swansea.

After that defeat Davies - who had one year left on his three-year contract - said he intended to honour his agreement and even met chairman Nigel Doughty to discuss plans for next season.

But two-time European Cup winners Forest have decided to turn to a new man as they seek a return to the top flight of English football. 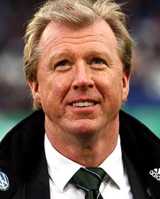 McClaren could have gone back to Holland to earn three times the amount Forest are offering him. But he wants to be back in English football

"He always felt he had not had enough support from the chairman for what he called 'stellar signings'. But they [the board] felt they had provided enough backing.

"There was always an uneasy truce between Doughty and Davies. Forest ran out of patience with him after they failed to get promotion again. And it was [also] a case of them feeling, perhaps, that they did not need so much turbulence.

"I understand Steve McClaren will get the job on Monday.

"He was looking for this challenge. He could have gone back to Holland, where he has previously managed FC Twente, to earn three times the amount Forest are offering him. But he wants to be back in English football. They are in advanced talks."

But, in dealing with the club's much-discussed transfer acquisitions committee, his relationship with the board has often seemed strained.

McClaren, who previously managed Middlesbrough in England, has been out of work since being sacked by Wolfsburg in February.