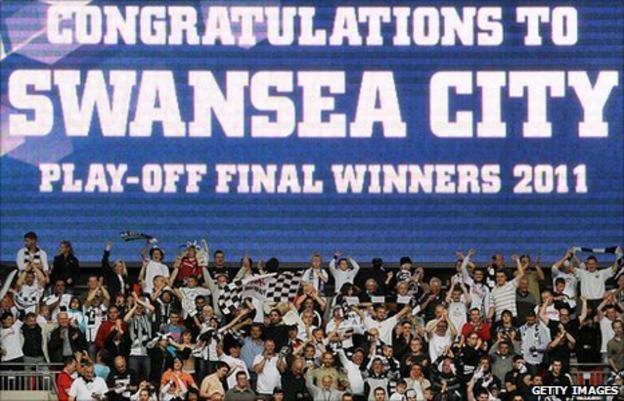 As far as footballing deals go, acquiring a club for a quid and banking a £90m return inside 10 years has to be up there as the sporting deal of the century.

Swansea City were down and going out of business in 2001 before a hardy bunch of supporters and local businessmen, rallied by former Swans stalwart Mel Nurse, came to the rescue.

Fans had taken to the streets to ensure previous owner Tony Petty got the message - and once the wreckage of his controversial three-month stewardship had been cleared, the heart of this close-knit Welsh community could beat soundly again.

But not even the ever-optimistic Nurse could have predicted the rags to riches story that was dramatically completed on a memorable Spring Bank Holiday at Wembley.

And like all fairytales, their Championship play-off final triumph over Reading had a twist that even Swans fan and Hollywood actor Michael Sheen would have enjoyed. 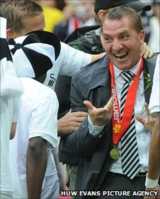 Swansea, leading 3-0 at the interval, survived Reading's stirring revival as the Royals came back with two goals inside eight second-half minutes.

But Scott Sinclair's third - a second composed penalty - confirmed a 4-2 triumph and Swansea's ticket to the millionaire's playground of the Premier League with its estimated £90m jackpot for the new boys.

Yet as Swansea celebrated the dawn of a golden era, the club always remember the dark days.

"Eight years ago the club won the last game of the season against Hull to stay in the Football League," said Swans manager Brendan Rodgers.

"And Swansea won that game 4-2 and one player scored a hat-trick that included two penalties.

"So it is absolutely ironic that to become the first Welsh team to go into the Premier League that someone got a hat-trick with penalties and we won 4-2. The footballing gods were with us."

But there is nothing divine about the reasons why Wales' second city still has a football club to call its own - Swansea City survived by virtue of the sheer commitment, courage and diligence of a bunch of proud Jacks.

The initial deal to satisfy Petty may have been small change but the new owners had to deal with an estimated £1.7m debt.

Directors sought a Company Voluntary Agreement to make their financial liabilities more manageable and hand the Welsh club hope and a future that now has never seemed so bright.

"I was talking to the chairman about that period," said Rodgers, who has completed the Swansea dream in his first year at the Liberty Stadium.

"And years ago the club couldn't even pay the electricity bill at the Vetch which is absolutely incredible if you look that we have just won the £90m game.

"It took brave people to come in and save the club. The club was very unstable in that moment but what you had is local businessmen and basically supporters who had the club at their heart.

"They were making decisions as supporters rather than as businessmen.

"There is no question that the close-knit community of Swansea helped the club during the dark days.

"That is the uniqueness of Swansea. It is down in south Wales and I think people think Wales stops at Cardiff but if you travel another hour down the road you come to a wonderful city, one of the most beautiful places in the world, where people's passion is only Swansea.

"There is no coincidence that our home record this season is the best in division and that is because of the passion and hostility as well as the quality of our players - so that ability to fight for the cause of saving the club was vital.

"The club has since taken off in the football department and let us hope now with finances that are in place at the club, it will hopefully allow it to stabilise and keep the business growing."

Investing in a football club is usually akin to throwing money down a black hole, but Swansea do things differently.

The ramshackle old Vetch Field was replaced by the smart Liberty Stadium, the council-run ground the Swans share with the Ospreys rugby region, and the once directionless club were now benefiting from a stable foundation.

Swansea had fallen on hard times since dropping out of the top-flight after two seasons in 1983 but once the books started balancing off the pitch, their swagger and style returned on it.

And it is perhaps fitting that Swansea completed their rise from bottom to top division inside six years with such joie de vivre just two days after the club they model themselves on had dished out yet another football lesson on the very same Wembley turf.

Swansea watched Barcelona demolish Manchester United in the Champions League before the team nicknamed 'Swansalona' strutted into the Premier League.

"This club is clever in that they understand the type of manager they want," added Rodgers.

"Nine out of 10 good managers wouldn't suit the Swansea way in how the club want to play - a wee bit like the Barcelona philosophy where they have a method and each manager brings in a new slant.

"And the Premier League will be a better place with Swansea in it."