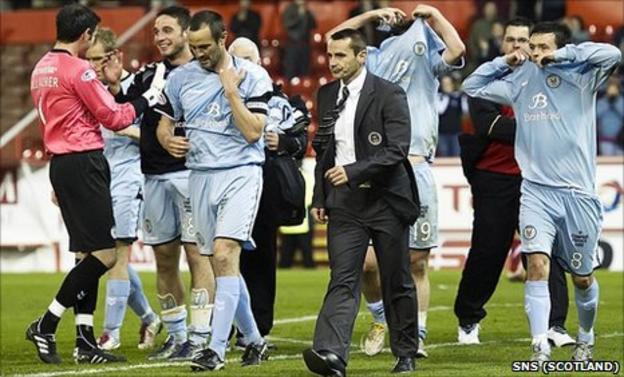 The Buddies' 1-0 win at Aberdeen and Hamilton's defeat by the same margin to St Johnstone in Perth ensured Accies will be relegated.

"It was important that we came up here and looked after ourselves," said Lennon. "It was a great performance.

"They knew what they had to go and do to get the job done and they did it."

Lennon was appointed last summer following the departure of Gus MacPherson and the former Cowdenbeath manager feels he has learned much from his first season in the SPL.

"I've got my teeth into what the SPL's all about now and what's required.

"It's been a great learning curve and one that I've relished. I've loved picking the brains of Craig Brown, Walter Smith, Neil Lennon, Jim Jefferies.

"And what I have learned is that they're all great guys, they're all there and willing to help you along the way. It's great when that happens.

"They've always got inspirational words to say to you or a little bit of advice. There are things that I've taken note of across the season and I thank each and every one of them for that because we all need that little bit of help along the way.

"I'll enjoy my wee break after Saturday and get back into things."

Gareth Wardlaw scored the only goal of the game at Pittodrie, latching on to Darren McGregor's knock-down to squeeze a shot past Jamie Langfield.

"I'm absolutely delighted and so proud of each and every single one of the players that took that field, even the ones behind me on the bench and the two that were up in the stand.

"Everybody in that dressing-room, everybody involved with the club, the board of directors; everybody's got to take a bit of credit for that.

"There was just a different atmosphere and a feeling in the dressing-room tonight that things were going to go our way.

"The way that they worked together, their commitment, the spirit, they've got gig, big hearts"