And Brendan Rodgers' footballing philosophy - rare in the blood, guts and thunder of the English league - adheres to the "beautiful game" ethics as Swansea are slowly becoming the second favourite team of purists.

The super-slick Swans enjoy dominating possession and playing with a tempo that few Championship sides have matched this season as the Welsh club stormed into the play-offs. 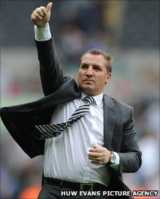 Every Swans player is comfortable with the ball at their feet in Rodgers' adaptation of "Total Football", perfected by the Dutch national side of the 1970s, where lumping the ball down the channels or into the stand is frowned upon.

It is an unique style that Swansea's own Dutchman Dorus de Vries feels has not just won admirers but has taken the club to the brink of the Premier League.

"We have great self-satisfaction about our style where we like to be dominant over the opposition, have a slick passing game and be positive going forward," said Swansea's record-breaking goalkeeper.

He added: "When I arrived four seasons ago when we were in League One, Roberto Martinez had just taken charge.

"He tried to build an attractive European brand of football but people said we're not going to win things playing beautiful stuff.

"But we managed to upset people as in his first year we won the League One title by a mile.

"Once we were promoted to the Championship, people again said Swansea are going down because of the way they try to play football.

"We upset everybody again as we finished eighth with virtually the same squad.

"We progressed last year and missed out on the play-offs by a point on the final day of the season with the same style of football, albeit a little bit more defensive.

"Now this season we have scored 60% more goals, only conceded five more than last year and upset the rules that we can play attractive football and succeed.

"I always want to watch beautiful sides, football is an entertainment business. Everyone loves to watch sides like Barcelona and Arsenal and that is how we try to play.

"But we have to win prizes because that is the main thing you want as a player."

De Vries has kept 45 clean sheets in the past two seasons as the footballing finesse that Swansea developed under Martinez, before his move to Premier League Wigan, has grown a solid backbone.

Swansea have often saved their sublime best for the television cameras with comprehensive triumphs over promoted Norwich City and Leeds United.

And their dominant performance against Championship play-off semi-final rivals Nottingham Forest in March will worry the team that stands between them and a 30 May Wembley final.

"We had some great games live on TV when the pressure was really on because we had to stay in the play-off positions," said De Vries, who was raised on "Total Football" and was a connoisseur of Italian and Spanish football rather than watching the "kick and rush" of the English game.

And Rodgers is a new breed of British coach that, while respecting the traditional English game, shares De Vries' continental values harvested from coaching experience in the Netherlands with Ajax and at Barcelona in Spain.

Rodgers, in his first season at the Liberty Stadium, inherited a talented squad that shares his footballing principles but has polished the edges as Swansea push for a top-flight return after 28 years in the lower leagues.

"It takes courage, it takes bravery and takes trust to play our brand of football," he insists.

"It is much more difficult to coach a team to play our way than telling them to kick the ball up the pitch, take no risks at the back and play only in the opponent's half.

"I have to trust my players, advise them which positions to get in to receive the ball and teach them to show patience if the killer pass is not on to build the game again.

"It is what we believe in, our style is important but football is no good on its own, we have to be able to penetrate.

"People have enjoyed watching us this season and it is a great compliment to my players as they have shown remarkable courage to play the way we want.

"But we are a team that can adjust. We can compete, we can battle, we can fight but we can also control our game.

"If we can hold it together for a little longer, it could be a fantastic end to a brilliant season."

The irony is not lost on Rodgers that the first Welsh team that could grace the English Premier League, may do it playing a foreign brand of football.