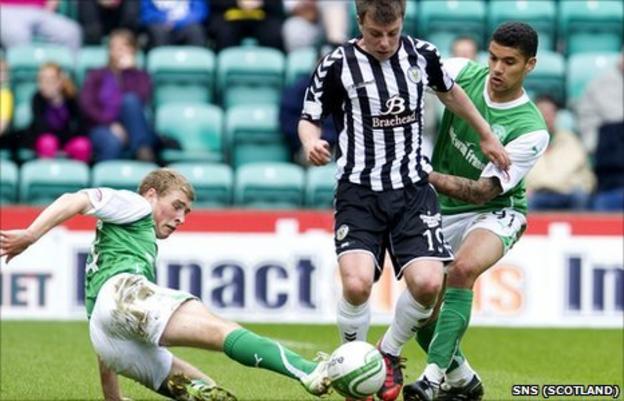 St Mirren manager Danny Lennon felt his team merited more than just a point from their visit to Hibernian.

"I felt that, for the level of performance we showed today, our efforts deserved more," Lennon told BBC Scotland.

"Although disappointed not to take maximum points it is our first point in Edinburgh this season.

"And we're another point better off (and closer to SPL safety) than we were before kick-off."

St Mirren went behind at Easter Road to Akpo Sodje's strike, before Craig Dargo levelled for Saints before half-time from the penalty spot.

The point leaves St Mirren 10 points ahead of bottom club Hamilton Accies, with the Lanarkshire club having five more games to play.

"I thought we were in control throughout the 90 minutes," said Lennon.

"I think we had an individual error in the middle of the park which led to their goal and good teams will punish you.

"We got a little break before half-time with the penalty, but we've not always had the breaks this season.

"Over the last two weeks we've played the Old Firm back-to-back in Glasgow and given very good levels of performance, but come away empty-handed.

"Today we came to the capital and picked up a point.

"So over the piece I'm delighted with the performance but disappointed not to give our fans maximum points.

"With four games to go we have to have the belief to win as many games as we can - if not the four of them."