Celtic's Neil Lennon believes that becoming the target for parcel bombs would not have happened had he been manager of any other football club.

Strathclyde Police are investigating after parcels were sent to Lennon and two others connected with Celtic.

"It leaves a bad taste in the mouth, but I'm totally committed to the club, the fans and the players," he said ahead of Sunday's Old Firm derby.

"It's my most difficult week in the job. We all know why it's happening."

Lennon gained a reputation as a feisty character while playing for Celtic before becoming manager but believes that the abuse now goes beyond the normal dislike for rivals.

The Northern Irish Catholic stopped playing international football for his country in 2002 after a death threat, said to be from loyalist paramilitaries.

Bullets were sent to the former Celtic captain earlier in the season, while a suspicious package addressed to him was also intercepted. 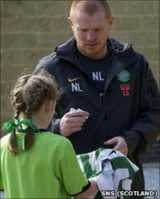 I've had this for 10 years, but I don't want to say you get used to it, because you never do

Alluding to the wider problem of bigotry, the team manager replied in the negative when asked if this would have happened at any club other than Celtic.

"It wouldn't, no," he said. "And it's not because it's my aggressive behaviour on the pitch any more.

"A lot was said about that when I played and I think you all know the reasons why these things are happening now.

"It's good that people are talking about it and we will get something done about it."

More than 2000 fans staged a candlelight vigil outside Celtic Park on Thursday night in support of Lennon.

However, of those who have targeted him, he said: "I am baffled that my persona can cause this type of poison in people.

"I have tried to be as positive as I can about all things in Scottish football.

"I have had spats with people, yes, but that's just in my nature and I don't think that will change.

"I think it is pretty unprecedented what has happened and I hope it is not going to get out of hand.

"Anyone in any walk of life shouldn't have to deal with something like this.

"It is uncomfortable, you see your face every hour on the hour on the news and, after a while, you start thinking 'is that me they are talking about?'

"It is disconcerting and uncomfortable, but I am well looked after by the people in charge and there is an ongoing investigation so I don't want to comment too much on that."

Lennon stressed that the pressures would not force him out of the Glasgow club, who face city rivals Rangers on Sunday in what is being billed as a title showdown.

"My life has changed a bit, but I have tried not to change it too much," he added.

"I am not under armed guard or anything like that, but we have had to curtail a few things and change things about my lifestyle, which is unfortunate. But I am hoping things can be brought to a head.

"I'd like to thank the police for all their briefing and the professionalism they have shown and the security they have given me over the last week, 10 days, they have been absolutely fantastic and made life as easy as possible under the circumstances.

Lennon also had no regrets about taking the job when Tony Mowbray exited the club last March.

"You get an opportunity to manage Celtic once in a lifetime," he added. "I would have regretted it the rest of my life if I hadn't taken it."