Kanu's winner for Portsmouth earned the then Premier League side a 1-0 win over the Bluebirds at Wembley to secure Pompey's first trophy since 1950.

But McNaughton admits their first shot at silverware since their 1927 FA Cup triumph was a "bonus" for Cardiff.

"In some ways Saturday's game is more important for us," said McNaughton.

The dependable Scottish international defender is one of just four first-team squad members still at the Cardiff City Stadium who played in that memorable Wembley finale of 2008.

Peter Whittingham and Stephen McPhail, if he shrugs off a niggling injury, will line up again against Portsmouth on Saturday three years on from the "hurtful" defeat.

Gavin Rae started at Wembley but the Scottish midfielder is expected to be on the substitutes' bench when Steve Cotterill's side visit second-placed Cardiff on Saturday.

Dave Jones' Welsh club are bidding for their fourth successive Championship triumph on Saturday as Cardiff hope enhance their Premier League push and consolidate their position in the second automatic promotion place.

McNaughton, who joined the Bluebirds from Aberdeen on a free transfer in 2006, has been arguably Cardiff's most consistent player this season and has played in all but two games of their Championship promotion bid.

And the 25-year-old will make his 400th career appearance against Portsmouth hoping to make amends for one of his most heartbreaking days in football. 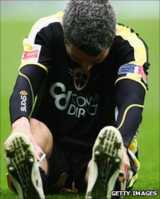 "There is always a score to settle with Portsmouth," said McNaughton.

"It took a while for me to watch that FA Cup final again because it did hurt a lot. I thought they were there for the taking but we didn't have enough on the day.

"So there is a bit more incentive on the game on Saturday.

"But while cup finals were great for us, it was just a bonus to get there.

"In terms in pushing this club onwards it would be an unbelievable step for this club to get into the Premier League.

"So it would be great to secure a victory to keep our run going and keep our spirits up for the QPR game."

Leaders Queen's Park Rangers, who visit the Cardiff City Stadium on Saturday week, are ten points clear of Cardiff while Jones' men have just a one point cushion from third-placed Norwich City.

Portsmouth were relegated from the Premier League last season after a year of turmoil when the south coast club were deducted nine points for going into administration in a campaign where Pompey had four different owners.

Cardiff have scored 14 goals in their five-match unbeaten run and versatile defender McNaughton, who has moved from his regular full-back role to deputise at centre-back because of Mark Hudson's injury, feels his side's fire-power could be the key to achieving promotion.

McNaughton was part of Cardiff's Championship play-off final defeat to Blackpool last season but feels the club are better equipped this year because of their potent strike-force of top-scorer Jay Bothroyd and on-loan Manchester City star Craig Bellamy.

"The difference from last season is our quality going forward," said McNaughton, who has helped Cardiff keep 11 clean sheets this season.

"We can score goals. We have such quality up front that if we keep clean sheet, we have a good chance of being able to win the match."